A-HOLES - couldn't they have waited for tranquilizers?

I am utterly disgusted...this idiot commits suicide and lets all his wild animals out (since apparently in Ohio you can own all kinds of wild animals) but the police decide to shoot them all dead - from horses, kangaroos and other wild animals. Couldn't they have simply warned everyone to stay inside and wait a couple of hours for wildlife officials to come with tranquilizers?  I feel utterly disgusted 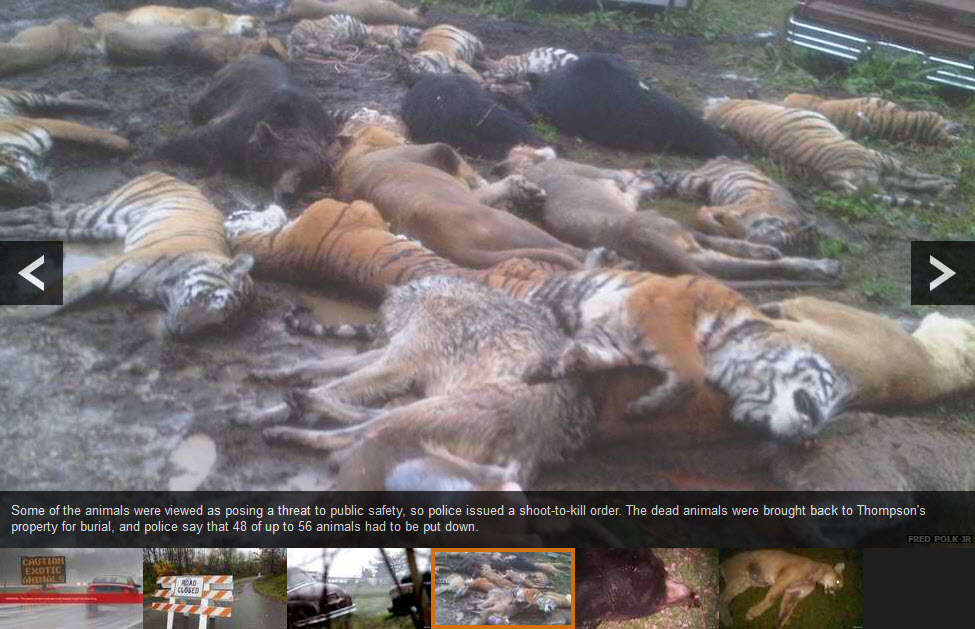 I'm an Ohio native.  There may be a few black bears still wild in places in the Buckeye State, but sitings are few and far between.  As for pumas, the last one known in the wild is YEARS ago.

As for the fool who released these animals then offed himself, I totally agree with kellie - HE is the cause of all of this.  A shame he didn't have the cojones to face the music.

I had cougar prints in my driveway several times and saw them in the distance when I lived in Morgantown.  There were several cougar sightings in that area and around Pittsburg.  I'm not sure how far Zanesville is from the WV/PA border.  You'll see black bears all the time in WV.

If Ohio's laws are this lax on exotic animals, then this is going to happen again.  Drug lords are fond of keeping large cats for protection and they won't be the nice kind this guy had.  They will be trained for viciousness.

I agree there was no way to save the tigers, because they are known to be the most aggressive of the large cats.  But it seems strange they could save the grizzlies and not the black bears.

What happened to the camels and the giraffes?  Surely no one considered  them so aggressive that they had to be killed as well?

Zanesville is mid-state, a bit west of Columbus.

As for Ohio's exotic animal laws, they are noted for being particularly lax, and John Kasich is being hammered for that now (in addition to his State Bill 5 BS!).  I'm sure we'll have something in place soon ... AFTER the proverbial horse has left the barn.

Permalink Reply by dr kellie on October 21, 2011 at 7:15am
From what I have read, the camels and giraffes are all ok.

maybe if bush was not voted for in 2000 (or cheated in) no pun
that'd be the money they missed for the tranquilizer opt..

Permalink Reply by Sassan K. on October 20, 2011 at 5:10pm
what an ignorant and irrelevant reply

Permalink Reply by Grace Fitzpatrick on October 21, 2011 at 9:03am
Frankly, I do drop some blame with the police and the state government.  This guy had 30 complaints called in in the past year alone.  He spent a year in jail for animal cruelty, why was he allowed to even keep a housecat with this record of animal abuse?  It seems like they had 30 opportunities to close this guy down in the last year alone and they didn't.  If he had been raising fighting dogs or chickens, they would have shut him down a long time ago.

Permalink Reply by dr kellie on October 21, 2011 at 10:14am
I wasn't speaking about the larger picture.  I was only addressing what happened that day.

Permalink Reply by Grace Fitzpatrick on October 21, 2011 at 10:29am
It makes no sense to me that this guy was still allowed to own any kind of animal even a fish, when he had years upon years of complaints and even had done jail time for animal abuse.  I  hope this sad event and changes the laws.  IMHO, no one without a special license should be keeping large exotic animals and those with permits should be inspected regularly.

I also feel horrible about the number of animals that were killed, but I do understand the necessity.  It's one thing to tranquilize an animal that is already confined, like at the zoo when they take them for medical procedures and things, but quite another to tranquilize a tiger that's been released.  You have to calculate the dosage and even if you get it right, it takes the animal a while to go down, during which time it will be angry and coming for you.  That is an unacceptable risk.  If there were no tranquilizers on hand (because nobody expects that many dangerous animals to be running around all at once), then getting them would take time that the cops didn't have.  People being inside their homes would afford no protection from animals like that.  A wild animal of any significant size will come right through your door or window to get at you (once it's finished attacking your livestock).  If I was a cop and there were that many lions and tigers and bears (oh my), my first thought would be the possibility of those animals killing me and other people, and no, I would not wait for tranquilizers, nor would I even use them if I had them. What I don't understand is why this guy was even allowed to have the animals.  It seems like a no-brainer, he was obviously unbalanced, had numerous violations and had threatened to release the animals.  That threat should have been enough to shut him down immediately, but instead we hear about all this red tape and missed deadlines.  If people want to run wild animal preserves, that's like keeping very dangerous weapons.  Shouldn't such people have to be psychologically sound?