Glaciers Cracking in the Presence of Carbon Dioxide

... CO2 molecules may be having a more direct impact on the ice that covers our planet. Researchers from the Massachusetts Institute for Technology have shown that the material strength and fracture toughness of ice are decreased significantly under increasing concentrations of CO2 molecules, making ice caps and glaciers more vulnerable to cracking and splitting into pieces,...

Ice caps and glaciers cover seven per cent of Earth -- more than Europe and North America combined -- and are responsible for reflecting 80-90 per cent of the Sun's light rays that enter our atmosphere and maintain Earth's temperature. They are also a natural carbon sink, capturing a large amount of CO2.

"If ice caps and glaciers were to continue to crack and break into pieces, their surface area that is exposed to air would be significantly increased, which could lead to accelerated melting and much reduced coverage area on the Earth.

The CO2 molecules accumulate at the crack tip and constantly attack the water molecules by trying to bond to them. This leaves broken bonds behind and increases the brittleness of the ice on a macroscopic scale. [emphasis mine]

I hadn't known that the 7% of Earth covered by ice acted as a CO2 sink, so as ice melts the CO2 it contains will be re-released too.

Another positive feedback we'd missed: we overestimated the potential of soil to store carbon.

It seems that any extra CO2 absorbed by plants due to higher CO2 levels isn't stored as wood. Instead it ends up being consumed by soil microbes who send the resulting CO2 right back into the air.

Until now, the accepted belief was that carbon is then stored in wood and soil for a long time, slowing climate change. Yet this new research suggests that the extra carbon provides fuel to microorganisms in the soil whose byproducts (such as CO2) are released into the atmosphere, contributing to climate change.

"Our findings mean that nature is not as efficient in slowing global warming as we previously thought," said Kees Jan van Groenigen, research fellow at the Center for Ecosystem Science and Society at NAU and lead author of the study. "By overlooking this effect of increased CO2 on soil microbes, models used by the Intergovernmental Panel on Climate Change may have overestimated the potential of soil to store carbon and mitigate the greenhouse effect."

... a lack of iron at the ocean surface can limit the effect of other key elements in helping plankton take up carbon. This effect is magnified in the southern ocean and equatorial Pacific and coastal areas, which are known to play a crucial role in influencing levels of CO2 in the global atmosphere.

... we were surprised by the many ways in which iron affects the CO2 given off by the oceans. If warming climates lower iron levels at the sea surface, as occurred in the past, this is bad news for the environment." [emphasis mine]

Warming climates intensify greenhouse gas given out by oceans

Warming climate can lower iron in ocean surface water, which limits the effect of other key nutrients too, impairing phytoplankton uptake of CO2. More of the greenhouse gas Nitrous oxide comes from land and ocean warming, another positive feedback to accelerate Climate Destabilization. It rose from  200 ppb to 260 ppb when the last ice age melted. As land warms, microbes produce more N2O. Low oxygen water, which we create by heating and polluting the oceans, also pumps out more N2O. We're already at 327 ppb.

... a new study confirms that atmospheric levels of N2O rose significantly as the Earth came out of the last ice age ...

The analysis documented a 30 percent increase in atmospheric nitrous oxide concentrations from 16,000 years ago to 10,000 years ago. This rise in N2O was caused by changes in environmental conditions in the ocean and on land, scientists say, and contributed to the warming at the end of the ice age and the melting of large ice sheets that then existed. The findings add an important new element to studies of how Earth may respond to a warming climate in the future.

... marine and terrestrial sources contributed about equally to the overall increase of nitrous oxide concentrations ...

Marine nitrous oxide production is linked closely to low oxygen conditions in the upper ocean and global warming is predicted to intensify the low-oxygen zones in many of the world's ocean basins. N2O also destroys ozone in the stratosphere. "Warming makes terrestrial microbes produce more nitrous oxide,"... [emphasis mine] proportions in CO 2 equivalents of the three major greenhouse gases

"We've identified that the boreal forest, particularly in Siberia, is converting from predominantly needle-shedding larch trees to evergreen conifers in response to warming climate,"…

"This will promote additional warming and vegetation change, particularly in areas with low species diversity." The "positive feedback" cycle of warming promoting warming showed an increase of absorbed surface warming.

"Such changes in that vast region have the potential to affect areas outside of the region," Shuman noted. The Russian boreal forest sits over a tremendous repository of carbon-rich soil frozen in the permafrost. As the forest changes in species distribution from larch to evergreens, warming of the ground surface would cause decomposition of the soil, releasing huge quantities of carbon dioxide into the atmosphere – possibly as much as 15 percent of the carbon dioxide currently in the atmosphere.

"This is not the scenario one would want to see," Shugart said. "It potentially would increase warming on a global scale." [emphasis mine] 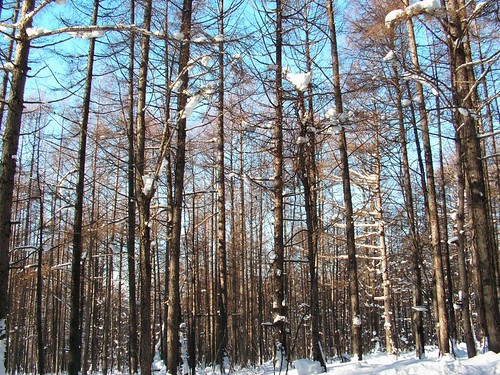 The greenhouse effect of laughing gas is 300 times stronger than for carbon dioxide, and even methane is 30 times stronger. As the amount of nitrous oxide emitted increases at higher temperatures, the discovery is significant against the backdrop of global warming.

... cryptogamic covers, the scientific name for the surface growth of lichens, mosses, cyanobacteria and other micro organisms, are responsible for four to nine percent of N2O from natural sources.

“The methane emissions of cryptogamic covers were negligible on a global scale. However, the high release rates of nitrous oxide were remarkable,”...

... cryptogamic covers absorb large quantities of carbon dioxide and nitrogen from the atmosphere. [emphasis mine] Moss is going to make climate change worse! But... but... does that mean a green roof emits greenhouse gas?

Hurricane Alex in the Atlantic seemed to be an outgrowth of El Nino. It moved toward Greenland and merged with a storm there to bring unusually warm conditions to Western Greenland. There's evidence this caused melt from the Jacobshavn Glacier on January 16. Greenland's glaciers usually gain mass in Winter, so this unprecedented melt could signal a new feedback from ocean warming that we hadn't anticipated.

Did a January Hurricane Just Set off a Massive Greenland Melt Event... Notice the red on Western Greenland, where air temperature reached freezing or above freezing in Winter.

More Signs of Winter Arctic Melt — Icebergs are Showing up off Newf...

Thanks to satellite data, scientists have finally figured out why G...

Professor Tristan L’Ecuyer says that his study found surface temperatures were up to three degrees higher as a result of increased cloud cover over the Greenland Ice Sheet. It does seem like the melt itself may be causing a feedback loop of its own: moisture in the air is a key component for cloud formation, which in turn traps heat in, which causes more melting, which puts more moisture in the air and allows more clouds to form. [emphasis mine]

'Blocking-high' pressure systems spawn most of the warming that mel...

According to Francis, blocking-high pressure systems over Greenland usually form when a lot of warm air is in the Arctic. And so far this year, it's been extremely warm and Arctic sea ice has been at record low levels for this time of year.

The Arctic warmth tends to weaken the jet stream, which typically flows west to east, allowing it to meander more to the north and south, Francis said.

The jet stream can take "such a big northward swing that it actually kind of breaks off and forms a closed circulation," she said. Blocking highs tend to be persistent and are hard to forecast, she added.

"Whenever there's a big melt year in Greenland, on the surface anyway, it's usually because there's either a blocking high or a large northward swing in the jet stream and both of those things tend to be long-lived features in the circulation," she said. Both transport a lot of heat, moisture and clouds over the Greenland ice sheet, leading to more melting.

The increased melting may lead to a slowdown of the circulation in the North Atlantic ocean, she said. A large pool of abnormally cool ocean water south of Greenland that could slow circulation… [emphasis mine] So the decreased air temperature gradient between equator and North Pole ends up slowing down global thermohaline circulation. Keep in mind, that links both hemispheres, so the effect could teleconnect to accelerate Antarctic ice shelf melt. Who knows how rapidly that knock-on effect would begin.

Here we go, another reason  to be shocked at how fast temperatures and sea level rise.

Wait! You mean that when the Arctic melts, it melts Greenland faster, and that could end up speeding Antarctic melt?

Duh - now you're getting it.

More and more, we're learning that we can't count on the "normal" conditions that we used to take for granted on this planet!

Worth (re)reading: "Embracing Climate Change and Preparing for Tomorrow"

If I was on the Titanic, and passengers were arguing about whether the ice berg was sent by the hands of a vengeful God... or whether it's the captain's fault for failing to see the iceberg, I would wonder about the sanity of the passengers.  I would do what I could to make sure that lifeboats were available to the largest number of possible passengers, and find whatever other flotation options for the others...

Fortunately... We see the coming storm.  We see the warnings, have seen them for years, and they are not changing.  If anything, the challenges will be more than we ever anticipated, and possibly happen faster.

How will we accommodate uncountable numbers of migrants?  How will we be safe?  How will we handle loss of shorelines... How will people make a living?... What infrastructure changes are needed, on a macro and micro scale?  These problems will require forward thinking, not political blinders and fear mongering.  It's going to happen.  We are responsible to think about it in proactive ways, and create opportunity instead of dread.

(Ellipses and emphases mine.)

This is a tiny excerpt; read the whole thing!

Thanks for that reminder.

Antarctica melt speedup is clear in this article on the Hansen paper:

The basic claim of the paper is that by burning fossil fuels at a prodigious pace and pouring heat-trapping gases into the atmosphere, humanity is about to provoke an abrupt climate shift.

Specifically, the authors believe that fresh water pouring into the oceans from melting land ice will set off a feedback loop that will cause parts of the great ice sheets in Greenland and Antarctica to disintegrate rapidly. [emphasis mine]