I would like to start a conversation re: Ayn Rand's Objective Ethics.  I recently listened to her entire book 'The Virtue of Selfishness' on youtube.  It was very interesting.  I think she's very intelligent, even if her value system is scary, particularly to those of us who are living in poverty and understand the kinds of things that arise from her worldview.

If we lived in a world where resources were endless, and where we aren't about to drown in the effluent of society and population run amok, maybe. As it is, no matter how independent someone thinks they are, what each of us does affects the rest.  Not just our needs, but our waste, our depletion of resources, the noise that we make, the pollution, loss of fisheries, climate change.  If Rand's philosophy can tell us why it's OK to ruin our world in pursuit of wealth, it would be interesting to hear.

In her time it might have made sense.  But now she's as dated as Marx and Adam Smith.

She labels the poor parasites who live off the WITS of the JOB CREATORS, who are of course the 1%, the wealthy.

It seems to me, as a member of the working class today, that usually it's the so-called job creators who are the parasites who live off other people's labor, they are generally the ones who work the least, earn the most, and have the most job stability.

She also goes from saying that selfishness is neutral to saying it's a virtue, and altruism is immoral. I was never able to follow that logic.  I understand the principle that FORCED altruism can be an assault on another person's rights, but to say that altruistic views are immoral, that's another claim.

Shes the product of the Cold War, and of the Russian Revolution, I can respect and understand that, but in her black-and-white doctrinal views she ends up rationalizing a capitalist version of Russian Communist tyranny, even to the point where she legitimizes one country invading and exploiting the resources of another in the name of capitalist freedom!  This is where her ethical philosophy entirely collapses and reveals itself as harmful.

She does, however, make some good points and some of her ideas should not be ruled out - such as her claim that only HUMANS (not corporations, countries or any other collective) have rights (although I would add animals have rights also) and that the Constitution exists to protect human rights and to protect citizens FROM the government.

Hiram, I agree with you.  I do not consider selfishness (narcissism) to be a virtue.  I do consider compassion and altruism to be virtues and necessary for society to function.

Even if what she had to say was once sensible, it's now dated and irrelevant.

The constitution does expst to protect human rights and protect citizens from the govt.  I wish it could also protect people from corporations.

Their crap includes healthcare, fuel, food (for most of us), and 95% of everything else we depend on. The Unibomber tried to reduce his dependency on corporate products and by all accounts smelled pretty bad.

We need to work together (we are govenment) to regulate for the common good.

It seems to me, as a member of the working class today, that usually it's the so-called job creators who are the parasites who live off other people's labor, they are generally the ones who work the least, earn the most, and have the most job stability.

Who are the 1%, and what do they do? To be included in that number, your income has to be above $170,000/year. This number includes entrepreneurs, doctors, lawyers, engineers and many other professions requiring long hours and post-secondary education. Hardly the parasites and leeches you claim. They are the people that keep society working and together. They are the job creators that Ayn Rand speaks of. Without them, we would be a third world country.

Where did you get your numbers Chris? The below figures from the irs put the top 1% amount at $380K. A big problem is income growth is much faster for the 1%.  Job creator can also be framed as work force dependent. I don't want anything from the 1% but fair living wages and for them to stop screwing the environment and ripping us off via big banks and other shady manipulative business practices. 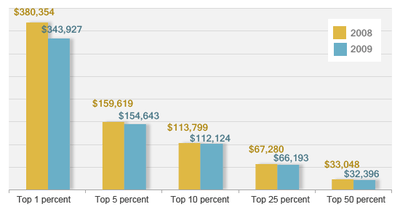 Sorry, the numbers I referred to are for Canada.

Also, you need to realize that corporate law in the United States (as well as other western countries) has been heavily slanted towards corporate welfare and cronyism. It is incredibly complex and difficult to open up a new business, and the laws, regulations and tax structures are designed to favour big business. This is far removed from the free market practices advocated by Rand.

Why do people assume doctors, lawyers, engineers, and generally people making a lot of money are job creators?

They're hardly the "leeches" Hiram refers to, which was the main point of my rebuttal; however, they also do create jobs, in both direct and abstract ways. Directly, they hire assistants and secretaries, as well as other office support and maintenance staff. In a more abstract sense, they need things like office supplies, computers, engineering equipment, medical equipment, et cetera. These things have to be produced, transported and so on, so they also create jobs by creating a demand for certain products.

"Job creators" is a substitute term for "trickle down economics". And because for the last 90 years it has been proven time and time again to be BULLSHIT they needed a new catch term.  The more people make the less likely they are to be creating any jobs.  My son in law makes around $60,000 a year with his carpet cleaning business and employes one part time two full time and  employees.

I wonder how many jobs (other than their taxpayer paid staff) McConnell, Boner, Ryan, Cantor or the rest of the austerity crowd have created?

I do believe ethics is objective, she suffered terrible injustice as a young woman in the name of socialism, and well, it changed something in her.

I can't say that it's my fault for being poor, I was laid off by Bank of America during 2008 just after the bailout and got into a mortgage that I could afford AT THE TIME based on my debt to income ratio when I purchased. I had no idea the economy would change so drastically. People who fail to contextualize the cycles of poverty sometimes scare me. It's not always the poor who are at fault.

I realize that utopia is not how nature works. But questions of ethics deal with how human life and behavior SHOULD be, not how nature operates. Nature is amoral, ruthless. Nature serves to teach us how things are, not how they might be. In other words, by proposing an Objectivist ETHICS, Ayn Rand takes up a challenge that goes beyond our nature, to tame it, to civilize man. Ethics is anti-natural.

I do agree with many of Ayn Rand's views, particularly her views on personal responsibility. I have to read more of her stuff to form a more complete opinion.

And forced altruism, like forcing people to say that they're religious or forcing them to go to church, only breeds and celebrates hipocrisy.

Joan Denoo replied to Joan Denoo's discussion Save lives or the Economy?
21 hours ago