I Was Trained for the Culture Wars in Home School, Awaiting Someone...

I'd imagined we'd be better off if the Denier-in-Chief had a heart attack and Pence took over. NOOO! Pence is the messiah for remaking our country as a Christian/Fascist theocracy.

I'd been unaware of the role of Quivefull and homeschooling in the White Nationalist takeover. 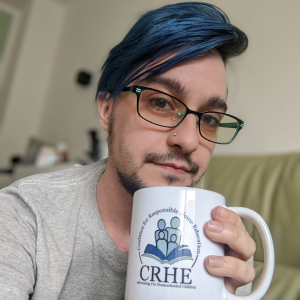 I grew up in the far-right evangelical conservative (Christofascist) movement; specifically, I was homeschooled and my parents were part of a subculture called Quiverfull, whose aim is to outbreed everyone for Jesus. I spent my teen years being a political activist. I was taught by every pastor I encountered that it was our job as Christians to outbreed the secularists (anyone not a far-right evangelical Protestant) and take over the government through sheer numbers. I was part of TeenPact, Generation Joshua and my local Teenage Republicans (TARS).

The Tea Party was step one. I was laying the groundwork for those elections in 2006. These people didn’t come out of the blue like it seemed. This plan, this Christofascist takeover of the US government, has been in the works for decades.

… around the 1970s, the foundation was being laid for the tragedy playing out right now.

Generation Joshua started in 2003, primarily catering to children homeschooled by extremely religious rightwing adults. Its purpose was to train us to fight in what the Christofascists have been calling the “Culture Wars.” It’s a loose and ambiguous term that basically means anything or anyone that doesn’t align with this very specific view of Christianity must not be allowed to continue.

How do you do that?

… you amend the Constitution to discriminate against queers, trans people, women and people of color. Then, you make laws legislating morality. The only way to do this is to infiltrate the government; so Generation Joshua, TeenPact and other organizations exist to indoctrinate and recruit homeschooled youth who have ample free time to participate in politics. The biggest resources for teaching civil discourse are the National Christian Forensics and Communications Association and Communicators for Christ(since renamed Institute for Cultural Communicators).

When we showed up to city council, local political party meetings and tours of the Capitol we asked intelligent questions, were respectful and had a vested interest in how our local political machine ran. We impressed every government official and staff member with our questions, earnesty and demeanor. In short, we were sneaky and polite Trojan horses; we had an agenda. Yes, even as 15-year-olds.

Trump being elected is also part of the plan, although not Trump specifically; the true goal is Pence.

Compared to Trump’s abrasive and terrifying behavior, Pence seems much less threatening. This is not the case. [emphasis mine] Those of us who didn’t leave the far Right are being elected to federal positions or are taking over states and cities. With Pence in office, even the reasonable-seeming incumbents  … are growing more bold in their attempts to further the Christofascist agenda: To Take Back The Country For Christ.

This was our mission. This is how we were to win: Outbreed, Outvote, Outactivate.

Homeschoolers are a huge reason for the evangelical conservative takeover we’ve seen over the last decade or so; it would be a mistake to write them off.

Evangelical conservatives are convinced that their agenda will save the country from God-ordained death. Pat Robertson and many others believe that natural disasters are sent from God specifically to punish America for letting marginalized people have rights and be alive. [emphasis mine]

This motivates them to do everything in their power to “save” the country from the ungodly – even, maybe especially – if it involves stripping others of the freedoms they deem to be against God’s wishes.

A single powerful person who is convinced of their own Rightness with no thought of introspection is dangerous. We now have a government full of them.

It is important to understand that they are coming at this from a place of passion and dedication. They have a fire in their bellies.

They are scared of anything newer than the 18th century; you can’t logic the fear of change away from people.

You cannot be this version of evangelical and not force your beliefs on others. Failing to convert is a failure on you and your dedication to your faith. This religion is based entirely on fear; you can’t argue away a fear so intense that it hardens you to anyone unlike you or your tribe. [emphasis mine] Permalink Reply by tom sarbeck on January 29, 2017 at 2:36am
They know what they are doing and how to do it. Anecdotally, they appear to be 32-33 percent of voters, more than enough to take over the Republican Party.
The First and Second Great Awakenings failed to make America religious.
I'm 86 and can look forward to being away if these people succeed.

Tom, we could be in a "Holy War" within months, with Pence one heartbeat from the podium and Steve Bannon on the National Security Council. Impeachment might be just what they need. Theocratic takeover could accompany a "war against Islamic terrorists", which would quickly mission-creep into a "soft" fully approved military coup. Even without open war, they're close to a constitutional convention, which could be used to legalize theocracy.

Steve Bannon, President Donald Trump's right-hand man, made what was essentially a call for a Christian holy war ... only a few years ago.

In remarks to a 2014 conference at the Vatican, Bannon warned his Christian audience, "We're at the very beginning stages of a very brutal and bloody conflict."

... Bannon articulated a view of the world as a constant conflict between the capitalist "Judeo-Christian West," which is a benevolent force of "enlightenment," and the malevolent forces of socialism, atheism, and Islam.

Trump's chief strategist, who will now play a crucial role in crafting U.S. foreign policy and sit in on meetings of the National Security Council Principals Committee, has been described even by hard-line conservatives as an extremist.

The 20th century, Bannon argued, constituted a kind of second Dark Age. He described its conflict as "the Judeo-Christian West versus atheism." [emphasis mine]

Us old folks may also be engulfed by a US Holocaust. Like climate change, political degradation is accelerating faster than anyone imagined. If this is even remotely true it doesn't surprise me. It's very easy for me to think that this has been planned and is happening, in which case it alarms me greatly.

OK, Ruth. You have made a believer out of me. I simply went to Google and looked up "Cristofascist." What I found backs you up 100% and goes back quite a few years. It appears that they have a plan and I'm also seeing that most of those I run onto on the Internet while discussing religion fall right into that category. Many may be spewing Cristofascist ideas unawares.

Ideas like "America founded by Christians for Christians" and other such nonsense that simply is not true abound. Getting their people elected to public office and even changing our Constitution and laws are part of the goal. This movement can weave into mainstream Christianity and hide very well, most likely being accepted by most of them. These people are who we should be really fighting.

This is as bad as ISIS and ISIL. Christofascism must be stopped and America is falling fight into it.

Permalink Reply by Compelledunbeliever on February 5, 2017 at 5:58am

Ruth, thank you for bringing up this subject. I did a little background check on Pence during the election. He was sold by the Trump party as the more mellow balance for Trumps "more radically different political style" so to speak.( not their words mine). The truth is I hope Trump has a long and healthy life without any tragedy. Pence is the Christian equivalent of "radical Islam" in that he will do (and is doing) the best to instill the Christian version of sharia law. No kidding he wants to over take the government and make it "Christian" as opposed to secular. I'm not being hateful or an alarmists here, that is truly what the man is about, just do a Google search on his record and quotes. He makes it VERY clear without apology. We need Trump in power to keep Pence on a leash(thats the scary part).

Permalink Reply by tom sarbeck on February 5, 2017 at 12:01pm
Were Pence to become president and try to xianize the nation, he would be in competition with Rudy Giuliani.

Rudy, according to the ACLU a few years ago, while NYC's mayor LOST more First Amendment lawsuits than any other American mayor.

Right you are. But there are bigger plans afoot that confuse the issue. There's good reason to think the Denier-in-Chief is setting up for a coup. I think the Muslim Ban and nominating "Fascist Forever Club" Neil Gorsuch are deliberate distractions, so the press and liberals don't notice.

It's possible Trump thinks he's using the ChristoFascists and they think they're using him. Either way, or both, you and I are in for the meat grinder.

It's possible Trump thinks he's using the ChristoFascists and they think they're using him. Either way, or both, you and I are in for the meat grinder.

I certainly do concur.

Ruth, one hope for our future could come from people like you -- raised to be part of the movement, but too engaged in thinking to remain part of the plot.

Do you have any idea how many like you there are?  I'd love to think it's a majority, but that doesn't seem likely.

Tree Hugger is now a member of Atheist Nexus
2 hours ago
Welcome Them!