2020 opens for me with a heavy heart. This graphic compares familiar wildfire crises with what's happening in Australia now. 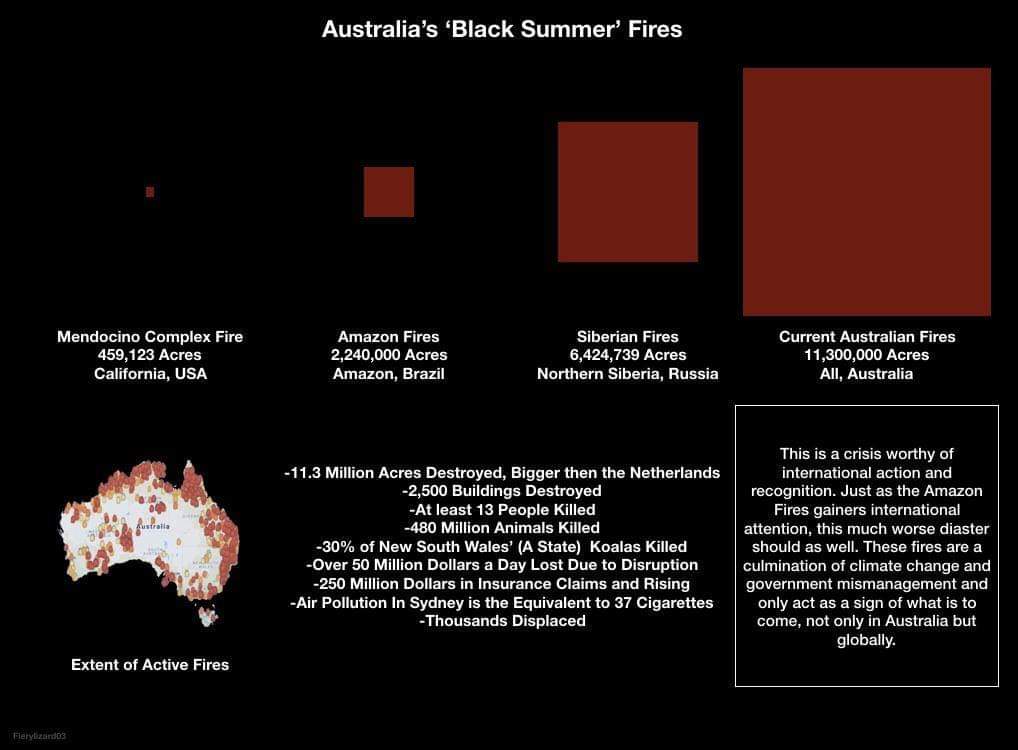 "Time in this moment feels like a long slog, in which one year is overtaken and suffocated by the next." Chauncey DeVega

Canberra's air is 20 times worse than the level of a health hazard. We're at 1.1 degree C rise. Australia's committed to coal and global elites to expanding all fossil fuels. 2020 feels like a tipping point to me, of our self-immolation descent.

I also saw another version a day or so ago: "The conservation group WWF-Australia estimates that 1.25 billion animals have been killed in the fires..."

With a worsening climate, the fires dappling Earth from the tropics to the tundra appear as the pilot flames of an advancing apocalypse.  To some commentators, so dire, so unprecedented are the forecast changes that they argue we have no language or narrative to express them. Eric Byler's personal story of family life with dangerous Canberra air is fascinating, like a glimpse of the future.

The Search for Clean Air Amid Australia’s Smoky Fires

"...the actions of the denialists have turned predatory: they are now an immediate threat to our children."

Tim Flannery frames climate deniers as child predators. "They are an immediate threat to our children." You can feel that immediate threat with Eric Byler, trying to protect his family from all-engulfing wildfire smoke.

Why ‘predatory’ climate deniers are a threat to our children

While the infirm, elderly, pregnant, and children are most at risk, those dangerous particles damage everyone's hearts, lungs, brains, immune systems, and bones.

I saw myself in, "An elderly woman had died from respiratory distress upon setting foot on the smoke-filled tarmac at the Canberra airport." as mentioned by Eric Byler.

Woman dies from bushfire smoke after getting off a Qantas plane in ...

This is the real world at 1.1 degree rise, when any of us elderly can get off a plane and quickly die from toxic air.

Australian wildlife and plant species took a big hit. Some species had their entire known range burnt out.

More than a third of NSW's national park land has been burnt by this season's "unprecedented" bushfires, potentially pushing dozens of threatened species including the long-footed potoroo to extinction in the wild.

More than half of the state's heathlands were torched, as were 41 per cent of wet sclerophyll forests and - as a measure of the state's acute drought - more than a third of NSW's rainforests. Even saline wetlands burned.

"We looked at 300 of NSW’s most vulnerable listed fauna species," the document states. "For some species such as the long-footed potoroo, almost every species sighting ever recorded is within the area affected by fire."

Other species, such as the Hastings River mouse and the brush-tailed rock-wallaby, also had their known ranges burnt out.

Among 651 of the most vulnerable flora species, 26 had their ranges entirely burnt while another 30 were located in areas 99 per cent affected.

"Even saline wetlands burned" This reminds me of a Reddit comment by someone who lived through South Africa's Apartheid upheaval, who advised that you can't prepare for collapse. If you think you can anticipate how social collapse will impact you, he said, you're wrong.wetlands burn in australia wildfire