A new paper from Oxford University, published in the journal Applied Energy, concludes that for humanity to have a 50-50 chance of meeting the temperature targets set in Paris, every new power plant has to be zero-carbon, starting next year.

That is hard. Really hard. At a bare minimum, it requires a willingness to go head-to-head with the two most powerful industries on the planet – fossil-fuel companies and the banks that finance them. Hillary Clinton is uniquely unsuited to this epic task.

While Clinton is great at warring with Republicans, taking on powerful corporations goes against her entire worldview, against everything she’s built, and everything she stands for. The real issue, in other words, isn’t Clinton’s corporate cash, it’s her deeply pro-corporate ideology: one that makes taking money from lobbyists and accepting exorbitant speech fees from banks seem so natural that the candidate is openly struggling to see why any of this has blown up at all.

To understand this worldview, one need look no further than the foundation where Hillary Clinton works and that bears her family name. Its mission can be distilled as follows: There is so much private wealth sloshing around our planet (thanks in very large part to the deregulation and privatisation frenzy that Bill Clinton unleashed on the world while president) that every single problem on earth, no matter how large, can be solved by convincing the ultra-rich to do the right things with their loose change. Naturally, the people to convince them to do these fine things are the Clintons, the ultimate relationship brokers and dealmakers, with the help of an entourage of A-list celebrities.

The problem with Clinton World is structural. It’s the way in which these profoundly enmeshed relationships – lubricated by the exchange of money, favours, status and media attention – shape what gets proposed as policy in the first place.

At the centre of it all is the canonical belief that change comes not by confronting the wealthy and powerful but by partnering with them. Viewed from within the logic of what Thomas Frank recently termed “the land of money”, all of Hillary Clinton’s most controversial actions make sense. Why not take money from fossil-fuel lobbyists? Why not get paid hundreds of thousands for speeches to Goldman Sachs? It’s not a conflict of interest; it’s a mutually beneficial partnership – part of a never-ending merry-go-round of corporate-political give and take.

Books have been filled with the failures of Clinton-style philanthrocapitalism. When it comes to climate change, we have all the evidence we need to know that this model is a disaster on a planetary scale. This is the logic that gave the world fraud-infested carbon markets and dodgy carbon offsets instead of tough regulation of polluters – because, we were told, emission reductions needed to be “win-win” and “market-friendly.”

Sanders and his supporters understand something critical: it won’t all be win-win. For any of this to happen, fossil-fuel companies, which have made obscene profits for decades, will have to start losing. And losing more than just the tax breaks and subsidies that Clinton is promising to cut. They will also have to lose the new drilling and mining leases they want; they’ll have to be denied permits for the pipelines and export terminals they very much want to build. They will have to leave trillions of dollars’ worth of proven fossil-fuel reserves in the ground. [emphasis mine]

Hillary sure can "play the game" like a capitalist. 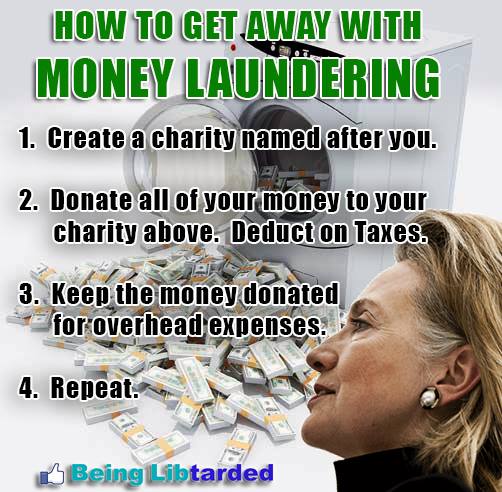 Daniel, there isn't enough money in the world that could move me to vote for Drumpf.  Hillary's integrity has been so slandered that everyone wants to take it as gospel when it isn't, and the fact is that either Bernie or Hillary would be infinitely better choices than anyone the GOP has to offer.

The Republicans once again have nothing to offer us.  No jive ... fact.

The problem is that the rest of us don't deserve the results of their "Bernie or nothing!" obstinacy.

While it's vitally important that Bernie get nominated and elected, any Democrat who's not a complete raving lunatic would still be infinitely better than any of the Republicans.

Appointments to the Supreme Court (and other federal judgeships) can make our lives much better or much worse for decades, long after the president in question has retired or even died.

Even if the Senate "Republicant's" don't prevent President Obama from appointing a justice to the Supreme Court seat vacated by Scalia, there may well be other vacancies in the next few years. Notorious RBG turned 83 last month. Anthony Kennedy is 79. Stephen Breyer is 77. I wish them long life and good health. I also recognize that nobody gets a free pass against shit happening. I'm a Republican that is going to vote for Clinton.  Cruz is too much into religon, and openly stated that he wants to get us back to our "Christian Beginnings".  Trump is a real dip shit.  Bernie wants to put us further in debt.  Clinton is the least of all the evils available to us this time.  It's a damned shame that we have to go for the least evil !!

I've been rather anti-Hillary for a long time, mostly because there's something about her personality that turns me off. Now, thanks to Ruth here, I have a better reason. However, if push comes to shove, it'll have to be a vote for her rather than any inane Republican, even Kasich.
I've been asked to "knock on doors for Bernie", and I may well do it.

UPDATE/CORRECTION: Some rather better news about the Clinton Foundation!

The financials audited by PricewaterhouseCoopers, the global independent accounting company, and the foundation’s tax filings show that about 90 percent of the money it raised went to its charitable programs. (Trump surrogates have falsely claimed that it was only 10 percent and that the rest was used as a Clinton “slush fund.”) No member of the Clinton family received any cash from the foundation, nor did it finance any political campaigns. In fact, like the Clintons, almost the entire board of directors works for free.

On the other hand, the Trump family rakes in untold millions of dollars from the Trump Organization every year. Much of that comes from deals with international financiers and developers, many of whom have been tied to controversial and even illegal activities. None of Trump’s overseas contractual business relationships examined by Newsweek were revealed in his campaign’s financial filings with the Federal Election Commission, nor was the amount paid to him by his foreign partners.

(From "Stunning Report: Trump Organization’s Secretive Global Financial Web Threatens National Security", Kurt Eichenwald, Newsweek, posted with permission at Alternet. The subtitle: "Trump’s global deals would make it impossible for him to conduct foreign policy. He would be 'most conflicted' president ever."

That's worth a discussion of its own! Read the whole thing!)

Thanks for cutting through the crap. I'd been taken in by the Trump lies.

Taylor is now a member of Atheist Nexus
17 hours ago
Welcome Them!