... Lindsey Graham recently asserted that AOC and the rest of the “Squad” are communists.

Democratic 2020 strategy must be gloves off and abandon all subtlet...

It seems the GOP today routinely accuses Democrats of their own bad behavior. This isn't mere projection, it's a propaganda tactic.

Dana Milbank at the Washington Post goes there: 'Mitch McConnell is...

The GOP uses name calling, instead take a look at how their actions justify an accusation.

Mitch McConnell is a Russian asset.

This doesn’t mean he’s a spy, but neither is it a flip accusation. Russia attacked our country in 2016. It is attacking us today. Its attacks will intensify in 2020. Yet each time we try to raise our defenses to repel the attack, McConnell, the Senate majority leader, blocks us from defending ourselves.

Let’s call this what it is: unpatriotic. The Kentucky Republican is, arguably more than any other American, doing Russian President Vladimir Putin’s bidding.

... blocking every piece of legislation designed to protect American electoral security that comes his way. 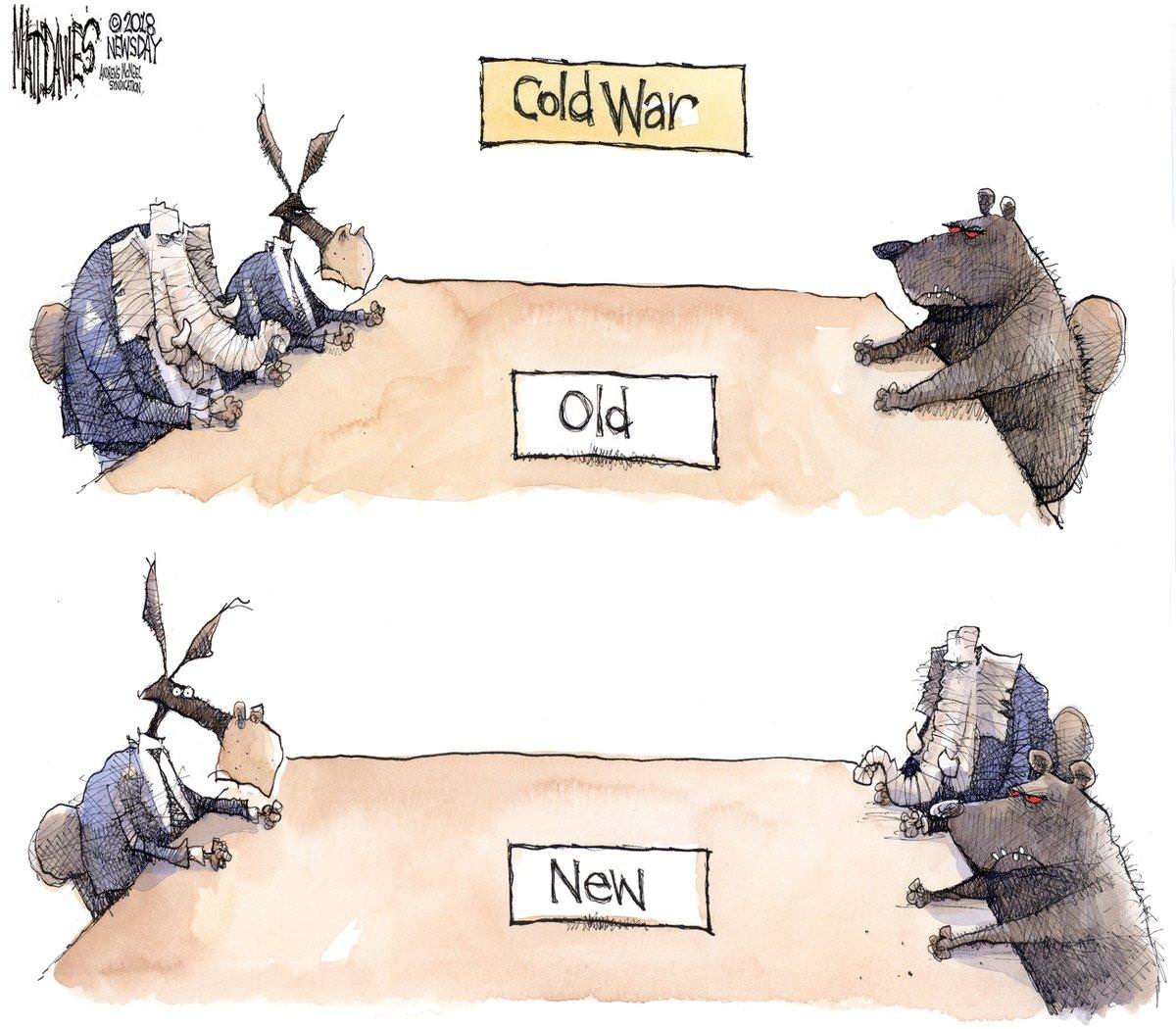 But wait! It's not enough to sabotage US democracy with every fiber of your being, if you're a "true" Republican leader. You have to wage domestic asymmetrical information war, destroy access to TRUTH, to shred the last tatters of our collective hold on reality.

There is a strategy behind Trump’s madness — and it’s already much ...

It's not enough to refuse Congress access to witnesses, documents, and DOJ investigations.

Trump has authorized Barr to look at all classified information, no matter the context. And to selectively share that information with whomever he pleases. Trump explicitly included sharing information with Republicans in Congress, such as Devin Nunes.

Because Barr is authorized to release only what he wants, he can select the bits and pieces that support Trump, leaving any information that might be harmful to Trump hidden.

The ability to selectively release any information out of context is indistinguishable from the ability to simply make things up. Trump, Barr, or anyone they are feeding information to can make any claim without being disputed. Against anyone.

All true, all of it ... except for the allegation that it is too late.  I don't think that it is, but we're coming very damned close to that point.  They've got the presidency, the Senate, and SCOTUS, though not by that much.  We have the House and the news media and (knock wood) a majority of the voting public.  What we need to do now is the following:

While we're waiting for the first Tuesday after the first Monday of November, 2020 to arrive, we need to let both of those "gentlemen" (and throw in Lindsey Graham, while you're at it) know that our eyes are on them, that they won't be able to sneeze without it getting into the wind.  We need to energize voters to recognize the danger we and this country are in and GET THEM TO THE POLLS.  In addition, Pelosi needs to be moved off her dime and admit that impeachment isn't just a nicety; It's Her Fucking DUTY, and it's time to turn Nadler loose on that task.

We can no longer afford the luxury of sitting on our hands.  Otherwise, the fate that Werner Herzog described and you posted the other day, Ruth, is all but a certainty.

And c’mon Ruth, pics aside, the sky has not yet reached earth.

And c’mon Tom, recognize parody when you see it.

I do have something relevant to whether the USA has passed the tipping point, not of democracy but of plutocratic oligarchy. I will post it when the fallout of the above has settled down.

Only the last image was parody, and it seemed obvious enough to me.

Tom, when you say "the sky has not yet reached earth" I assume you mean that there's still enough semblance of normalcy for you to believe this political situation is reversible by politics as usual.

I think Loren's judgment that impeachment is Pelosi’s Fucking DUTY will be obvious to you in hindsight, if it's not your moral position now. Of course that's not a stated legal obligation of her position. I personally see her performance as impaired, even as a political tactic.

I caution you against the kind of naiveté  displayed by Holtzman and Goodman in Here’s why AG Barr ‘crossed the line established by federal crimina....

They urge congress to "call for a special counsel to” investigate the attorney general", because it's clear Barr repeatedly lied to Congress under oath. As if today's Justice Department could be trusted to investigate and prosecute the head of Justice. When loyalty to a unitary executive replaces sworn duty, justice means nothing. Congress is toothless in that regard.

That sort of unitary executive theory is strikingly parallel to Hitler's Führerprinzip, where his will trumped (pun intended) any written law. The warnings of fascism are not exaggerated.

The word “fascism” didn’t exist in 1787, when at least one in the Constitutional Convention that year foresaw aristocracy.

Ruth, the sky has not yet fallen (i.e., the tipping point hasn’t passed) on democracy because democracy hasn’t been tried—except in the eighteen states whose voters have the direct initiative, referendum and recall. Elsewhere, corruption is normalcy.

Re Pelosi: she is far more expert than you or I. It’s naive to think that after impeachment, the Senate will convict.

Holtzman and Goodman are naive, or complicit in ways you and I don’t know. Barr should be impeached.

Congress toothless? Its leaders are probably complicit; they certainly have opportunities for personal gain. Loren, I don't think we have the news media on the side of truth.

As for impeachment, Mark Sumner makes the point that it may be too late.

It leaves impeachment as the only possible option. But it also means that any impeachment inquiry is also likely to face a repeat of the stonewall. There seems to be no force left that can move Barr to take any step to help in such a proceeding, and no threat from the judiciary that they can’t simply shrug off.

With Justice fully under Trump's control, a Trump crony about to head US Intelligence, and those implicated in crime simply refusing to testify, lying under oath, or plying non-answers, do you really see a chance that a dead-on-Senate-arrival impeachment could wake up the public? Even if Trump died, or violated the nonexistent standards of his base, Pence would waltz in to do worse - and the remaining GOP "machine" would eliminate democracy anyway.

Ruth, I am not yet psychologically helpless or philosophically despairing.

I never meant to imply that.

Ruth, I saw no Implication about me in what you wrote.

I saw helplessness and/or despair in Pence would waltz in to do worse - and the remaining GOP "machine" would eliminate democracy anyway.

1) Democracy cannot be eliminated from where it does not exist. America has always been oligarchic—ruled by a few.

2) Pence’s waltzing in to do worse requires more than imagined support.

I agree that the US has always been oligarchic, until recently there were two functioning political parties which had politicians with some ethical standards, and significant separation of church and state. We're now approaching open Unitary Executive power, with one so-called party completely on board with loyalty instead of keeping their oaths of office and no regard for truth.

As I see it, the corporate powers calling the shots for the GOP are fine with instituting a de facto theocracy, and embracing White Supremacy, as a means to solidify control. This is typical of fascist regimes. Pence is 100% pro-corporation, so he's useful.

Joan Denoo replied to Joan Denoo's discussion Save lives or the Economy?
21 hours ago