Dental Hygiene Could Save Your Brain

A gum disease bacterium is associated with Alzheimer’s and other diseases, and not just by increasing inflammation. After oxygen-depleted pockets form between the gum and tooth, due to plaque, Porphyromonas gingivalis , establishes itself.

Has the real cause of alzheimers, diabetes and stroke been found?

It actually perpetuates inflammation by producing molecules that block some inflammatory processes, but not all of them, says Caroline Genco of Tufts University in Massachusetts. The resulting weakened inflammation never quite destroys the bacteria, but keeps trying, killing your own cells in the process. The debris is a feast for P. gingivalis, which, unlike most bacteria, needs to eat protein. 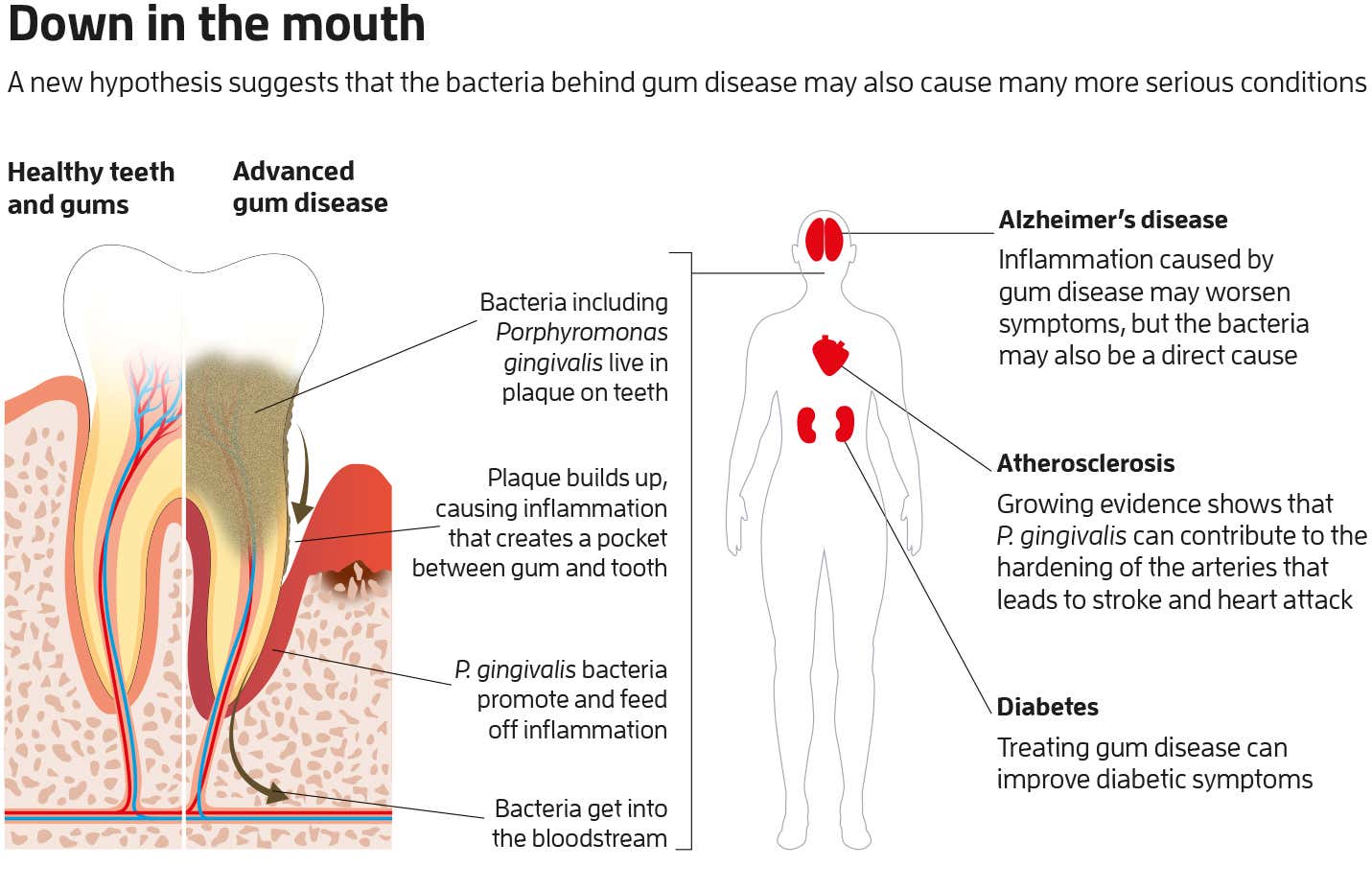 … once in the blood, P. gingivalis changes its surface proteins so it can hide inside white blood cells of the immune system, says Genco. It also enters cells lining arteries.

… even changing a blood cell’s gene expression to make it migrate to other sites of inflammation, where the bacteria can hop out and feast again.

One explanation for why gum disease makes you more likely to get conditions like diabetes and Alzheimer’s disease is that it adds to your general “inflammatory load”. But P. gingivalis may act more directly too: the bacteria have been detected in inflamed tissue in the brain, aorta, heart, liver, spleen, kidneys, joints and pancreas in mice and , in many cases, humans.

... why not just kill it? Unfortunately, it is brilliant at dodging our defences: lurking inside cells where antibodies can’t reach it, and often lying dormant, making it invisible to antibiotics, which mostly attack bacteria as they divide.

… in January, teams at eight universities and the San Francisco company Cortexyme found a protein-digesting enzyme called gingipain, produced only by P. gingivalis , in 99 per cent of brain samples from people who died with Alzheimer’s, at levels corresponding to the severity of the condition. They also found the bacteria in spinal fluid. Giving mice the bacteria caused symptoms of Alzheimer’s, and blocking gingipains reversed the damage.

There is growing evidence for a causal link to atherosclerosis, or “hardening of the arteries”. Researchers have found P. gingivalis in the fatty deposits that line arterial walls and cause blood clots. [emphasis mine]