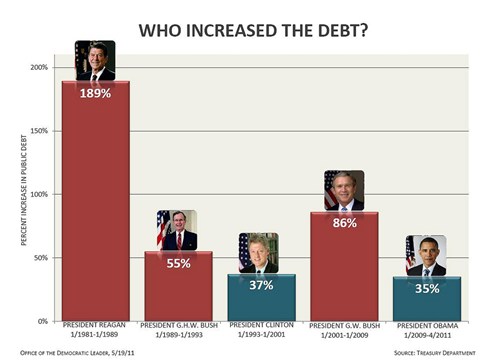 Republicans only use the excuse of the deficit and the national debt being too large to justify cutting social programs they don't like.

While that is technically accurate, it is a bit misleading.  It is the dollar amount that has increased that matters (or at least the dollar amount as a percentage of GDP), not the percentage increase over when the President took office.  Also, consider that President Obama has only been in office for 3 1/2 years compared to 8 years for Reagan, Clinton, and George W. Bush.

Don't get me wrong, Reagan and both Bush's racked up a huge amount of debt.  The majority of the debt we have incurred under the Obama administration is a direct result of trying to curb the recession and end the wars that were inherited from the Bush administration (though I don't think President Obama has done nearly enough to bring spending under control).  At the same time, I don't put all of the blame for the financial crisis on the shoulders of President Bush.  While he contributed to the housing bubble, that bubble started back in the early '90s with policies enacted by both Democrats and Republicans.

While he contributed to the housing bubble, that bubble started back in the early '90s with policies enacted by both Democrats and Republicans.\

Repeal of Glass-Stegall was important as well as placing derivatives beyond regulation in the Commodity Futures Modernization Act of 2000, which Clinton signed into law on his way out the door. The Fed played a part by lowering interest rates to the point where banks felt they must do much riskier lending to maintain income.

There is a lot of blame to go around. Going back several decades the economy began to run on credit with consumers racking up large amounts of debt to finance lifestyles their income would not permit. This helped to transfer wealth upwards, leaving them with little in the way of safety nets when things got rough. Now millions are out of jobs, have lost their houses, and depleted their retirement incomes.

No one is reading the charts (or stats) - all they see is the superficial - popularity contests and what the candidates are wearing - other mundane issues.