Hey, everyone we need your help.

We want to create several social networking buttons to be used on your websites. Many of you have used the Atheist Nexus badges, but we want to create ones like we see all the time. Like these: 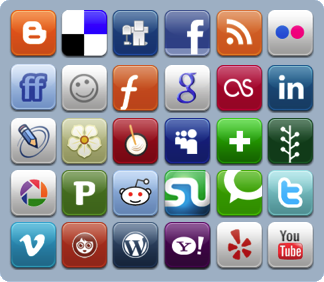 The Foundation Beyond Belief had one created for their website. One graphic artist created the ones below. I like them, but they may be too dark. Here's what we need:

1. Graphic artists: reply to this discuss with a sample of your own.
2.  Everyone else: Do you like the simple "X" (like is used with Facebook and Twitter)? Or, should we keep the word "US" with it as well?

Soon we will have a page with dozens of samples free for the taking. If yours is used, full credit will be given.

Not sure if this is still active but my $.02

I really like any of the various X's, as in the OP examples. I've always seen it as a combination of two ideas. The atomic orbits and the intersection of ideas/people. I prefer the narrow gray X over a simple background. The orange is ok but I think it complicates things a bit more than necessary. I prefer the narrow X as it somehow conveys concise thinking (yeah, whatever...). Too fat and it almost likes like something sci-fi.

The US does strike me as a United States kind of thing. I think that's because they seem to almost be upper case letters. I realize that without another letter (such as an A) to compare it is difficult to identify the case but I'd like to see examples including lower case us. Maybe even different from each other in some way such as size or location. It might be possible to make the atom symbol seem to fly, or appearing on the icon, if done right (ok, a bit whacky but I'm brainstorming here). If a way could be found to include the us I prefer it as it conveys the idea of community, a worthy goal in this case.

Having the A, for Atheist is ok but I think it detracts from the power of the X. I don't think everything has to be spelled out. You have to remember, the purpose of the graphic is to give you something memorable to click on. Simplicity can be powerful.