ARS POETICA is a group for those who love poetry, anyone who is just curious, and everyone in between. Post your favorite or original poems. 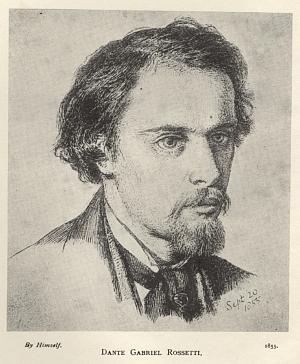 Two separate divided silences,
Which, brought together, would find loving voice;
Two glances which together would rejoice
In love, now lost like stars beyond dark trees;
Two hands apart whose touch alone gives ease;
Two bosoms which, heart-shrined with mutual flame,
Would, meeting in one clasp, be made the same;
Two souls, the shores wave-mocked of sundering seas:--

Such are we now. Ah! may our hope forecast
Indeed one hour again, when on this stream
Of darkened love once more the light shall gleam?
An hour how slow to come, how quickly past,
Which blooms and fades, and only leaves at last,
Faint as shed flowers, the attenuated dream.

The absence of religion in Shakespeare

The Emperor of Ice-Cream - Wallace Stevens

Robert Frost - The Road Not Taken

Peace and Joy - by Mequa

And then, there was .....Edgar Allan Poe

The Indian upon God

Ballade for the Delusional

And in the end.

I little something I wrote, What the hell right??

The Apology by Ralph Waldo Emerson

I Go Among Trees and Sit Still by Wendell Berry

You need to be a member of ARS POETICA to add comments!

Latin for 'art.' As in the MGM motto 'Ars Gratia Artis' - art for art's sake.

Sometimes the words just fall into place, this time into Adelaide Crapsey's cinquain form, five lines with 2, 4, 6, 8 and 2 syllables:

Bunk! He didn't feel; he only

I was a soldier once.

I like it, Write4U. Very much. The chaos behind everyday life showing thru, overlaid with humor/pathos.Very well done indeed.

Nice work, write4U. This poem's got everything - evocative imagery of both scenery and people, nature and humanity, and more important, a story to tell. I like the way you ended where you began. There is pathos there, a hidden sadness behind the superficially happy scene. You write4US!

Well, Moses got to see His back parts but the Bible doesn't record how hairy the crack was. Would have been interesting to know if He was circumcised.

SOMETHING CAN'T FROM NOTHING COME

In the beginning God created the heaven and the earth

So the bible lays it down. Let's see what this is worth

In the beginning must be god, fundamentalists insist

Something can't from nothing come, that seems to be their gist

But god is surely something, isn't he or she?

(Apparently, it is assumed our maker is a he,

Though no one's seen his genitals, least of all you or me)

Something can't from nothing come, so where does that leave we?

A problem not addressed, neither by puritan or quaker

Not by catholic, protestant or eastern orthodox

Something can't from nothing come, that is the paradox

As you can see, cat up a tree, in Genesis verse one

That's only the beginning, there is plenty more to come.

Something can't from nothing come, and our heads are up our bum.

In the beginning? Before the maker's maker god begat?

In the beginning? Well, my friend, what happened before that?

Nothing, you say? So we cannot exist - that's my conclusion

Something can't from nothing come is just a mere illusion.

From that primeval soup of bonding chemicals, when and where?

Well dingaling, that's just the thing our scientists are about.

Something can't from nothing come? One day we will find out.

I have of late, but wherefore I know not, lost all my mirth, forgone all custom of exercise. And indeed, it goes so heavenly with my disposition, that this goodly frame, the Earth, seems to me a sterile promontory. This most excellent canopy the air - look you, this brave o'er-hanging firmament, this majestical roof, fretted with golden fire - why, it appears no other thing to me than a foul and pestilent congregation of vapors.

What a piece of work is a man! How noble in reason, how infinite in faculties. In form and moving, how express and admirable. In action, how like an angel. In apprehension how like a god. The beauty of the world, the paragon of animals. And yet to me, what is this quintessence of dust?

This is still my favorite quote from Shakespeare's plays. It's usually called 'What a piece of work is man'. It's very popular and I'm sure many of you know it. It's written in blank verse rather than the usual  'iambic pentimeter', and spoken by Hamlet to Rosenkrantz and Guilderstern in Act II. I especially like the second part.

It suggests an atheistic or agnostic world view quite advanced for its time and though it refers to a 'heavenly frame'. I think it parallels, though a lot more lyrically, Eric Idle's words from 'Always look on the bright side of life' (Monty Python's Life of Brian). When Eric sings 'Life's a piece of shit, when you look at it' he's actually paraphrasing this passage in a modern vernacular.

In the late 1960s musical 'Hair', scandalous at the time due to full frontal nudity for the first time on Broadway, this speech was set to music by Galt McDermott Ingeniously, the lyricists, Gerome Ragni and James Rado, switched  the two paragraphs around for much better effect. Try reading it this way.

The paragraphs are inserted by me and I've modernized Shakespeare's original words somewhat for better impact. I've also deleted some material from the beginning and the end, but otherwise nothing is omitted.