A group for people who enjoy the stars. :)

Possible shape of the universe

The Five Planets in the Sky.

You need to be a member of Astronomers to add comments!

It would be nice to book a ride on a space elevator Idaho.

The problem with the elevators Idaho is the inability to lengthen the nano tube technology past a certain distance, this is a technical problem not a show stopper.

The Magellan scope is hopefully the next stage in the light gathering power that we'll have at our disposal. By the way sk8eycat don't pre-empt your demise, you'll be alive as long as fortune allows, like the rest of us.

I've been interested in space elevators for many years.  It's a little discouraging that more progress hasn't been made.  I've never heard of the lunar elevator, but it sounds interesting. 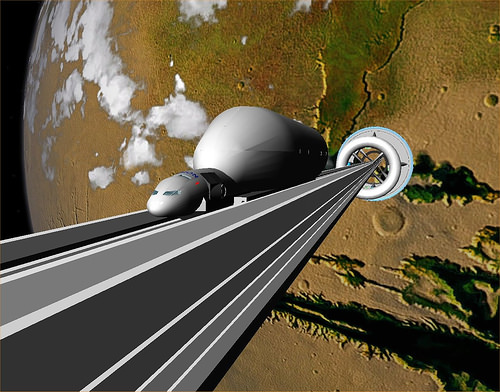 The idea of a space elevator has been around since the late 1800’s, but despite big dreams and years of research, the low-cost, easy access to orbit that a space elevator promises is likely still decades away. The biggest problem rests on the fact that no one has been able to successfully manufacture long ribbons made of ultra-light, ultra-strong carbon nanotubes, the only known material that is strong enough for a space elevator. But entrepreneur Michael Laine believes a lunar elevator – a space elevator from the surface of the Moon – could be created with materials that are available now. With more research and the right amount of capital, Laine says a lunar elevator could be built within a decade.

While Laine said he is still “emotionally very invested” in the concept of a space elevator based on Earth, for now he has shifted his focus to the lunar elevator. “There was a question of where was I going to put my time,” he told Universe Today, “and being able to do this soon – perhaps within 5-7 years and not some mythic 15-25 years in the future is enticing.”

Since the Moon’s gravity is only one sixth that of Earth, it drastically reduces the requirements of the ribbon. A material that is available now, a synthetic polymer material called Zylon (poly(p-phenylene-2,6-benzobisoxazole) which has high strength and excellent thermal stability, could be used.

Additionally, the components to build the elevator that would be sent to the Moon would be relatively lightweight, so a smaller rocket would do the job. “The physical requirements of the system look like you could use a standard Atlas or Delta rocket to launch the components.” Laine said. “That’s a big deal that you don’t need to build something like a Saturn V.”

While Laine said he believes a lunar elevator in 5-7 years is feasible, he didn’t want to go on record as saying it could be built in such a short time frame without adding some major caveats.

The biggest hurdle could be getting access to the 6 cubic meters of the Zylon material. “That actually could be the biggest challenge,” Laine said.

Additionally, there are still an untold amount of unknowns about building such a system. “I used to say for the space elevator that we still didn’t know all the questions, let alone the answers,” Laine said, “and that is even more true for the lunar elevator.”

The other hurdle is money. But a lunar elevator might actually be cheaper 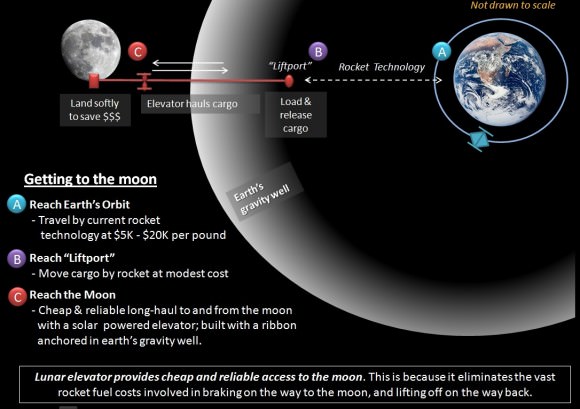 These coronal magnetic loops are tantalisingly beyond full understanding.

Amazing sun images Joan.  I read what is pictured, but couldn't understand it all.

They say the blue and yellow areas are opposite poles of the magnetic field, and the threads are magnetic flux.  Whatever is going on, it looks powerful and wild. Coronal Loops Over a Sunspot Group

Coronal Loops Over a Sunspot Group