Another fascinating LOLcat meme, with a political bent. I can see copycats ripping up assorted public enemies such as Rex Tillerson. 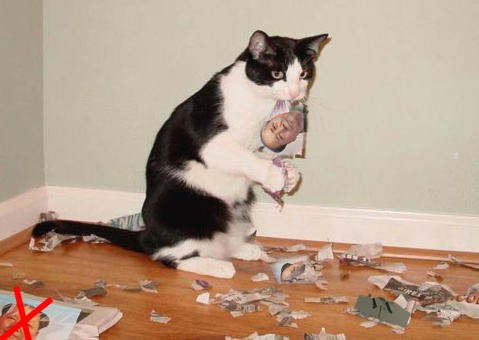 Today's story of controversy comes from China's microblogging platform Weibo, where a new photo fad that involves ripping up portraits of Chairman Mao has sparked backlashes from the supporters of the Chinese revolutionary hero as the nation's Communist Party prepares for its 18th decennial National Congress next week. According to The Daily Dot, the "Mao-ripping meme" was started by four young men from Zhengzhou, Henan to protest the Cambodian government's prosecution of a Chinese woman for tearing up late King-Father Norodom Sihanouk's photos, but their original intent got lost somewhere along the way. Image Courtesy: @Hexiefarm

They seem to be following on with a Mao-mocking tradition which started out with B. Kliban, to wit: Alden Marchi Fleming is now a member of Atheist Nexus
14 hours ago
Welcome Them!