Take an amusing quiz to learn about unexpected effects of Climate Change. After each multiple choice question, you see if you were right (and the right answer if you weren't).

Think you know the off effects of Global Climate change?

As you can see I got one wrong for every two correct answers.

Add the possibility of incestuous suicidal clownfish to the list of odd results of Climate Change.

Now this is where we are getting into hypothesis territory, because we know that other pollutants can influence a sea animal’s behavior and sensory ..., but CO2 is only starting to be investigated in this role (4). Clownfish in particular appear to be sensitive to elevated levels of carbon dioxide when they are “settlement-stage larvae”–little fish floating around looking for a good sea anemone to call home. In a normal environment, these larvae select a home based on odors in the water, much like I did when I first moved to the city. Big fail on my part.

Normally, settlement-stage clownfish larvae avoid places where their parents live, and seek out places where there are few predators. Makes sense right? This strategy helps avoid incest and getting eaten – rules to live by. But, when reared in an elevated CO2 environment, their ability to sense these things becomes all screwy. Rather than avoiding their parent’s scent, they are attracted to it (5) – boomerang kids or is it just Chinatown? Furthermore, they are also attracted to predator scent cues rather than avoiding them (6) – oops!

So, incestuous, suicidal clownfish? Maybe. There isn’t any evidence yet that these clownfish would actually be so confused as to mate with their parents or get swallowed up by a hungry predator. Just because their sensory systems are impacted, doesn’t mean they wouldn’t figure out the mistake and take off ASAP. It’s the early research stage – stay tuned as the story evolves.

Climate Change and Clownfish Incest: the future could be way weird During the recent heat wave in Australia,

... that people can’t even pump gas. Nikki Staskiewicz and Angela Blomeley were stranded in Oodnadatta — which bills itself as “the driest town [in] the driest state of the driest country” in the world — when they tried to fill up their tank, only to find the fuel vaporizing in the triple-digit heat.

It’s Now So Hot in Australia that Gasoline Evaporates Before You Ca...

I wonder if a solar-powered car would have enough energy to go any farther than to the mailbox? I don't know the distance between towns, but I would hate to have to walk for gas in that heat.

... Australia and other areas of the world are experiencing an increase in bush and wildfires, which may continue and intensify with global climate change. Smoke from those fires can travel long distances and poses a special threat for wine grapes. Grapes exposed to smoke yield wines with unpalatable aromas and tastes, sometimes described as resembling "smoked meat," "disinfectant" or a "dirty ashtray."

My goodness! strange world we live in. Great articles!

Defensive walls built around Ludlow in 1233 are suddenly crumbling.

“It’s amazing that they have stood for 800 years and the climate change that has affected them over the last couple of years has wreaked so much damage.” ... last year was the second wettest year on record.

Giant mosquitoes, the size of quarters, are likely to infest Florida this summer, according to experts from the University of Florida.

These huge, biting insects, which are called Psorophora ciliata, or more commonly known as gallinippers...

Female gallinippers lay their eggs in soil at the borders of water bodies that overflow after heavy rain, such as ponds and streams. Therefore, they are referred to as floodwater mosquitoes.

The eggs can stay dry and inactive for a long time, even years, until waters are high enough to help them hatch.

Florida was hit by Tropical Storm Debbie last june, which resulted in flooding in several areas and the release of great numbers of gallinippers and other floodwater mosquitoes.

The mosquito is native to the whole Eastern side of North America and its body is approximately half an inch long with a black-and-white color patten, making it look like a super-sized form of the invasive Asian tiger mosquito.

The species is well-known for being aggressive and having a painful bite. "The bite really hurts, I can attest to that," Kaufman said. The pain has been described as similar to being stabbed.

Another odd result of climate change. Wild figs in the tropics are likely to be among the first plants there to go extinct.

There are more than 700 species of wild fig in the tropics. Most can be pollinated only by a unique species of fig wasp. In turn, the wasps rely on fig plants as hosts for their eggs. Neither species can survive without the other.

Now a new study from equatorial Singapore, in the journal Biology Letters, finds that the wasps are vulnerable to climate change, meaning that the wild fig plants are, too.

The scientists found that temperature increases of a few degrees could cut the adult life spans of pollinating fig wasps to just a few hours, from one or two days.

Around 80 degrees Fahrenheit, the mean daily temperature in Singapore, the life span of the studied wasps ranged from 11 to 24 hours. At 87.8 degrees F, the life span dropped to 6 to 18 hours, and at 93.2 degrees F, it was six hours or less. 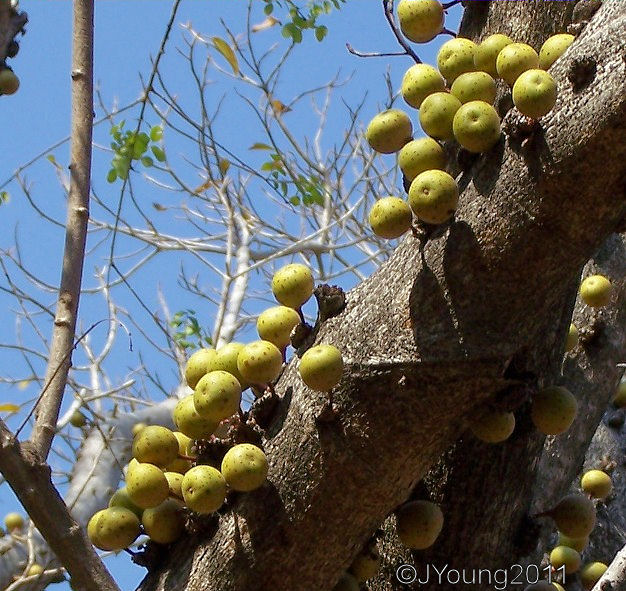 ... water vapor injected into the stratosphere by powerful thunderstorms converts stable forms of chlorine and bromine into free radicals capable of transforming ozone molecules into oxygen. Recent studies have suggested that the number and intensity of such storms are linked to climate change.

“What this research does is connect, for the first time, climate change with ozone depletion, and ozone loss is directly tied to increases in skin cancer incidence, because more ultraviolet radiation is penetrating the atmosphere.”

Adding to this quote,

“There has been a major effort by the medical community to define the relationship between decreases in ozone and the subsequent increases in skin cancer,” he said. “The answer is quite clear: If you multiply the fractional decrease in ozone protection by about three, you get the increase in skin cancer incidence. There are 1 million new skin cancer cases in the U.S. annually—it’s the most common form of cancer, and it’s one that’s increasing in spite of all the medical research devoted to it.”

“In my mind, this is not just a broad public health issue,” Anderson said. “This is about actually being able to step out into the sunlight — it’s about your children and your children’s health. Of course, we don’t know how rapidly the frequency and intensity of these storms will increase, so we can’t place a time scale on this problem, but the core issue here is quite straightforward and simple, because we understand this chemistry.”

No wonder my doctor continues to warn me to use strong sunscreen at all times, even in winter.

Our sewer systems, poorly prepared to deal with the effects of even moderate rainstorms, dump billions of gallons of raw sewage into lakes, rivers and oceans each year. Superstorm Sandy alone caused more than 10.9 billion gallons of sewage to flow untreated into the East Coast ecosystem.

At the heart of this problem is a piece of antiquated infrastructure called the combined sewer, which funnels both waste-water and storm-water towards treatment plants in the same stream. During heavy rainfall, storm drains and sewage treatment plants can't handle the increased (if diluted) volume of sewage, and so into the river it goes. It's called "combined sewer overflow" (CSO):

Solutions are expensive. The back-end fix is an expansion of waste-water treatment plants, though this additional capacity lies unused during all but the most intense storms. Alternately, and at even higher cost, a city can take preventative measures by segregating disposal systems for sewage and storm-water.

It no longer suffices for sewers to be mere conduits. They must be storage tanks themselves.

Enter the inflatable dam. When activated, these giant sewer balloons turn roiling trunk lines into holding pens, rivers into lakes. They save raw sewage for a sunny day.

U.S. cities have installed dozens of these devices over the past decade. Made of industrial grade rubber and anchored to a cement base, the dam inflates on command to restrict sewer flow, like a plug in a giant drain. When the rain has passed, it deflates and allows CSO to flow slowly to the treatment plant.

Inflatable dams have been around for more than half a century, initially developed to stall flash floods in Southern California and allow rainwater to seep into aquifers.

... as U.S. cities begin to deal with more frequent flooding from climate change, and search for handy technology to divert water. The next frontier will be rail tunnels: New York's Metropolitan Transit Authority sustained nearly $5 billion in damage due to flooding from Superstorm Sandy. Parts of New York City were isolated for weeks.

On Thursday, the MTA inflated a plug in a tunnel at the South Ferry station. Fourteen feet in diameter and 30 feet long, this giant contraption and others like it may be expected to protect the network's longest tunnels from water damage. Plugs, like inflatable dams, would use a simple air barrier to hold back millions of gallons of fluid. Reckoned to cost $400,000 a piece, they are something of a bargain.