Paul Ryan assures his audience, “We’re not going to give up on destroying the healthcare system for the American people.”

Every executive order and piece of GOP legislation is destructive, aimed at dismantling something else, never creating anything new, never in the service of improving the care of the nation. That void at the heart of the party, that loss of any tether to humanity, …

… would be sad if it wasn’t so dangerous.

In the wake of the Republican party’s luscious, succulent failure to obliterate the Affordable Care Act (Obamacare) and replace it with catastrophic nationwide poverty and death, an old video of a Paul Ryan gaffe went viral. “We’re not going to give up,” Ryan assures his audience, “on destroying the healthcare system for the American people.” [order changed, bold and highlight mine]

...destruction, not life, is the foundation of Ryan's party. Neal Gabler agrees about their failure to build, but argues that Republicans aren't nihilists but anarchists.

America Is Barreling Toward Political Anarchy, Not an Organized Fas...

Republicans never had a viable plan, not just about health care, but about anything, be it tax reform or energy or education. That is why their only remedies are less regulation and more tax cuts.

There is a good reason for this, and it isn’t incompetence, though there is plenty of that, too. Republicans may talk tough. They may tout the idea of conservative, market-driven solutions to our problems, but somehow, serious solutions never get presented because, frankly, Republicans don’t have any interest in them.

When you come down to it, Republicans are really anarchists dedicated to undermining government in the furtherance of an economic state of nature where the rich rule.

Republicans are great at opposing things, destroying things, obstructing things, undoing things. They are really, really terrible at creating things because they have no desire to do so.

There is, however, a method to this madness. Anarchism isn’t nihilism. By undoing government, anarchism undoes the only protection most Americans have against the depredations of the Trumps of this world and against the often cruel vicissitudes of life, like health crises. Take away government, and you strip away those protections. But take away government, and you also enable Trump and his fellow plutocrats to further enrich themselves because there would no mechanism to stop them. This has long been the Republican way: greed disguised as a fear of government overreach. Joker Trump and his Republican cronies are bent on deconstructing government to leave the rest of us defenseless against them. [emphasis mine] 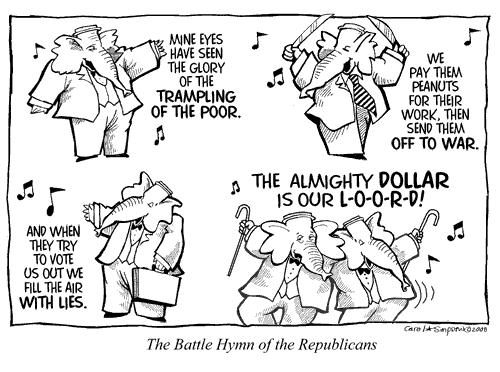