Wow - so behind - trying to get caught up on your discussions.

So 20 year time frame - wow that's so close. I hope they get on the ball and start thinking of solutions.

Now that we appreciate how dangerous methane is, we've just discovered an overlooked reservoir holding as much as Arctic permafrost, but even more vulnerable to evaporating.

"This is an immense amount of organic carbon, more than ten times the size of carbon stocks in northern permafrost regions," Wadham said. "Our laboratory experiments tell us that these sub-ice environments are also biologically active, meaning that this organic carbon is probably being metabolized to carbon dioxide and methane gas by microbes."

They also calculated that the potential amount of methane hydrate and free methane gas beneath the Antarctic Ice Sheet could be up to 4 billion metric tons, a similar order of magnitude to some estimates made for Arctic permafrost. The predicted shallow depth of these potential reserves also makes them more susceptible to climate forcing than other methane hydrate reserves on Earth. [emphasis mine] Note the bubbles in the left part of the image, compared to normal ocean on the right.

Russian scientists have discovered spots in the Arctic Ocean where mass emissions of methane can be observed.

According to the press-service of the expedition aboard The Viktor Buinitsky research vessel, the diameter of some of the ‘methane fields’ found in the northern part of the Laptev Sea exceeds 1 kilometre.

Were the vessel to sail into that bubbling methane field, it might sink. Large outgassings of methane temporarily decrease water density, so stuff which normally floats sinks. Will this pose a shipping hazard to vessels plying the Arctic passage in summer?

The evidence mounts. Obama needs to address these issues.

For whom is one to vote? Romney is out, Obama doesn't realize the economic problems caused by his administration, no one is taking up the climate change or getting off fossil fuels. What intelligent options exist?

This diagram illustrates methane reservoirs in the Arctic. The Eastern Siberian Arctic Shelf is a shallow area of the Arctic Ocean seafloor with vast methane deposits trapped beneath a subsea permafrost layer. Warming has already created over a hundred holes where methane is bubbling out.

A section of the Arctic Ocean seafloor that holds vast stores of frozen methane is showing signs of instability and widespread venting of the powerful greenhouse gas, according to the findings of an international research team led by University of Alaska Fairbanks scientists Natalia Shakhova and Igor Semiletov.

The research results, published in the March 5, 2013 edition of the journal Science, show that the permafrost under the East Siberian Arctic Shelf, long thought to be an impermeable barrier sealing in methane, is perforated and is starting to leak large amounts of methane into the atmosphere. Release of even a fraction of the methane stored in the shelf could trigger abrupt climate warming.

Not at all good news! Response: stay calm, explore options, publicize research, stay flexible. Respond to events as they occur. Enjoy the present moment with a full appreciation for all the full-of-wonder gifts we enjoy.

Watch Susan Jacoby - The Dumbing Down Of America. The Arctic Methane Emergency Group of climate scientists warns that the planet stands at the edge of abrupt and catastrophic climate change.

... some of the world’s most renowned climate scientists formed AMEG, because they were prompted by indisputable signals of the beginning stages of massive releases of methane, thus, threatening an extinction event on planet Earth.

... AMEG has studied key non-linear trends in the Earth-human System and reached the stunning conclusion that the planet stands at the edge of abrupt and catastrophic climate change as a result of an unprecedented rate of change in the Arctic.

According to the U.S. Department of Energy, Office of Science, as of February 2013, methane levels in the atmosphere are measured at 1,874 ppb (parts per billion.) This level, in an historical context, is more than twice as high as any time since 400,000 years before the industrial revolution. In the past, methane has ranged between 300-400 ppb during glacial periods and 600-700 ppb during warm interglacial periods.

In 2012, expeditionary teams in the Arctic were shocked, and dismayed, to find methane bubbling up from deep ocean sites. “Previous observations have pointed to large methane plumes being released from the seabed in the relatively shallow sea off the northern coast of Siberia, but the latest findings were made far away from land in the deep, open ocean where the surface is usually capped by ice.”1

Moreover, as if discovering methane emissions from the deep seas of the Arctic isn’t already of major concern, a recent study discovered immense amounts of methane locked under Antarctic ice: “They… calculated that the potential amount of methane hydrate and free methane gas beneath the Antarctic Ice Sheet could be up to 4 billion metric tons, a similar order of magnitude to some estimates made for Arctic permafrost. The predicted shallow depth of these potential reserves also makes them more susceptible to climate forcing than other methane hydrate reserves on Earth.”2

According to the Arctic Methane Emergency Group (AMEG), the “Arctic is in meltdown.” As such, AMEG has declared: “An extremely high international security risk of acute climate disruption followed by runaway global warming.”

According to David Wasdell, International Coordinator, Meridian Programme: “A runaway climate change is now clear and beginning to be quantified for the first time… the greatest threat we face as a planet… The rate of change we’re generating in the current situation is between 200-300 times faster than that experience of any extinction event apart from the asteroidal impact.

We’ve lost about 40% of the phytoplankton in the oceans which is the basis of the food chain.”

... the albedo effect is collapsing in the Arctic.

A collapsing albedo effect is ominously apocalyptic for the Arctic, and for the world. And, disturbingly, Arctic albedo is already in the collapsing stage. This will inevitably lead to ever more methane emissions and a vicious cycle of feedbacks leading to an extinction event, probably unstoppable.

According to physicist Paul Beckwith, University of Ottawa, ... methane is the key now to a ‘tipping point’ in the climate. He believes it is entirely possible that before 2020 the Arctic will be clear of sea ice with open waters three months of the year ... [emphasis mine]

Senior US government officials are to be briefed at the White House this week on the danger of an ice-free Arctic in the summer within two years.

The meeting is bringing together Nasa's acting chief scientist, Gale Allen, the director of the US National Science Foundation, Cora Marett, as well as representatives from the US Department of Homeland Security and the Pentagon.

This is the latest indication that US officials are increasingly concerned about the international and domestic security implications of climate change.

Senior scientists advising the US government at the meeting include 10 Arctic specialists, including marine scientist Prof Carlos Duarte, director of the Oceans Institute at the University of Western Australia.

In early April, Duarte warned that the Arctic summer sea ice was melting at a rate faster than predicted by conventional climate models, and could be ice free as early as 2015 -...

Duarte is lead author of a paper published last year in Nature Climate Change documenting how "tipping elements" in the Arctic ecosystems leading to "abrupt changes" that would dramatically impact "the global earth system" had "already started up". Duarte and his team concluded: "We are facing the first clear evidence of dangerous climate change."

Extreme weather events over the last few years apparently driven by the accelerating Arctic melt process - including unprecedented heatwaves and droughts in the US and Russia, along with snowstorms and cold weather in northern Europe – have undermined harvests, dramatically impacting global food production and contributing to civil unrest.

The group, which includes among its founding members leading Arctic specialists such as Prof Peter Wadhams, head of the Polar Ocean Physics Group at Cambridge University, stated that:

"The weather extremes from last year are causing real problems for farmers, not only in the UK, but in the US and many grain-producing countries. World food production can be expected to decline, with mass starvation inevitable. The price of food will rise inexorably, producing global unrest and making food security even more of an issue."

... very high methane levels that have been recorded over Antarctica recently.

These very high methane emissions occur on the heights of East Antarctica. Antarctica is covered in a thick layer of ice. It appears that these very high emissions are caused by methane from hydrates that is escaping in the form of free gas bubbling up through the ice sheet. [emphasis mine]

Antarctic methane peaks at 2249 ppb
These very high methane emissions occur on the heights of East Antarctica. The map below shows the highest altitudes on Antarctica colored red. 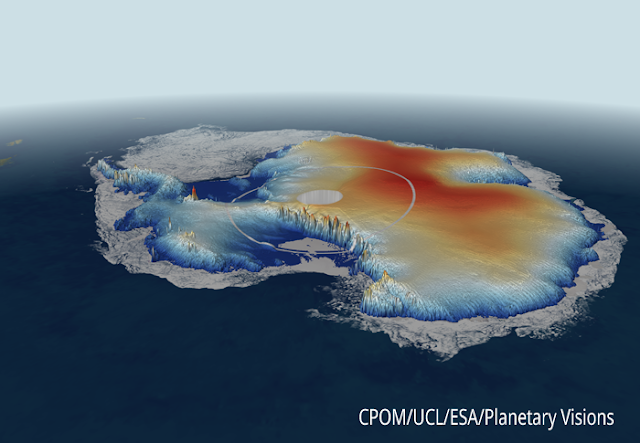