Step Changes in Your Future

2016 started off way hotter than 2015. A sudden jump like this is called a step change. If you expect we'll now cool off to our previous decadal average, forget that. We've "leveled up".

The current warming surge amounts to what’s called a step change — a practically instantaneous shift in our planet’s climate.

This sudden shift in temperature has arrived because of a confluence of events: Long-term global warming, the multiyear effect of El Niño, and extreme weather — including persistent heat waves at the regional scale.

The major cause of February’s exceptional warmth is global warming,…

… El Niño can’t explain all or even most of the current warming spike — especially the warmth in the Arctic.

El Niño warming probably explains about 0.2 degrees Celsius of the current global surge, according to a modeling study from the Met Office (the U.K.’s national meteorological service).

Based on the Met Office’s estimates and my calculations, 2016 will probably be around 1.1 to 1.5 degrees above the 1850-1900 average. An annual breach of 2 degrees could happen as soon as 2030, according to climate model simulations,…

According to a five-year prediction from the Met Office, global temperatures may fall slightly over the next year or two, as the El Niño wanes and temporarily cooler ocean temperatures associated with La Niña take hold. But global warming will make that respite brief: 2018, 2019 and 2020 will likely be warmer than 2015, and the warming trend is expected to continue long after that. Sixteen of the 18 years that followed the last big El Niño (1997-98) were warmer than 1997. [emphasis mine]

When Will The World Really Be 2 Degrees Hotter Than It Used To Be?

Step changes also happen in other climate issues, such as the rate of sea level rise. Sudden jumps in the rate of melt indicate a tipping point was passed, and new self-reinforcements have kicked in.

Doubling times in non linear events often don’t fit a pure exponential curve — instead tending to follow a series of spikes and recessions with major transitional events coming at the end of any ‘curve.’ [emphasis mine]

Our path ahead: major transitional events kicking us into new regimes of change we'll hate. Thanks for the image -- "So you thought things were easy, under control... think again!!"

Except that this isn't a game.

This is scary stuff, folks!

Yes, and it is difficult to stay rational when so many factors point toward the end of life as we know it.

The following is a neat climatological map.

You can grab the planet and spin it around and zoom in on an area. Click on "earth" on the bottom left to change parameters.

The past three month temperature jump seems like nonlinear change, according to Gwynne Dyer.

IF YOU spend a lot of time talking to scientists about climate change, there's one word you'll hear time and time again, and yet it's hardly ever mentioned in the public discussion of climate change. The word is "non-linear".

As for the frightening acceleration in the warming in the past three months, that has no precedent in any El Nino year, or indeed in any previous year. … Could this be non-linear change, an abrupt and irreversible change in the climate? Yes. And if it is, how far will it go before it stabilises again at some higher average global temperature? Nobody knows.

… the warming is now accelerating in an unprecedented way. Based on the first three months, 2016 is predicted to average 1.32°C above preindustrial.

As a result, 2016 will likely have jumped by about a quarter of a degree Celsius in a single year.

That counts as a step change. A climate regime change, or step change, has been documented for 1987 by Philip C. Reid and 28 other authors in Global impacts of the 1980s regime shift.

Regime shifts are abrupt, substantial and persistent changes in the state of natural systems.  [emphasis mine]

This change wasn't recognized until now

...due to a paucity of long-term time series that are maintained and sampled in the same consistent way over decades, and a compartmentalization of science with insufficient communication between different disciplines.

For inclusion in the analysed database, continuous data sets needed to be within the period 1946 to 2012 and start by 1980 at the latest.

... a fundamental shift in the climate system took place at this time. It is clear that rapidly increasing temperature is central to the shifts, with rising concentrations of greenhouse gases contributing to a net warming of global climate since the late 1970s…

Temperature appears to be the main forcing factor behind the shift:...

Independent of our study, there is substantial evidence that changes in the heat structure of the world are profoundly affecting regional climate variability, the cryosphere, terrestrial systems, sea level, ocean hydrodynamics and the biogeochemistry, ecosystems and living resources of the world.

What is the trigger that initiated the sudden increase in temperature ...?

Our results based on CMIP5 and statistical modelling indicate that a combination of warming from natural and anthropogenic forcing was responsible as a rebound from the cooling that followed the El Chichón eruption together with a reduction in stratospheric aerosols, although the relative contribution of each forcing factor is still unclear.

The major volcanic eruption of El Chichón in 1982 was responsible for an estimated cooling of 0.2–0.3 °C per decade, offsetting anthropogenic warming and resulting in relatively small global mean temperature trends in the early 1980s. ... recovery from the climatic impacts of the eruption, including a reduction in stratospheric aerosol concentrations, led to a natural warming, reinforcing anthropogenic warming and producing a rapid increase in global mean temperature on a higher level than before the eruption ... As a result, the global climate shifted to a warmer state in just a few years, setting in motion a cascade of responses in natural systems.

A small excerpt from the mind-numbing charts. [same legend as above]

El Nino is clearly over, but we still had the hottest June ever. Here's the update:

These were the hottest and coolest anomalies in June.

July 2016 was the hottest month on record. 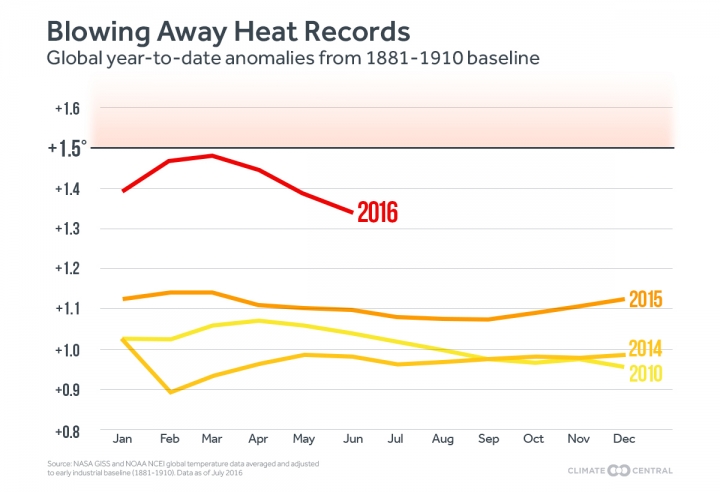 The reign of record hot months in 2016 continues, with last month claiming the title of hottest July on record globally, according to data released by NASA on Monday. This July was also the hottest month on record for the world.

Schmidt said he expects July will be the last record hot month of this year as the residual heat from an exceptionally strong El Niño dies away. Though El Niño itself was declared over in June, global temperatures tend to lag by about two to three months.

I read that ALL the months this year were the hottest January, February, March, etc. on record!