I posted the crunch recipe on the garden group comment page.  It's also appropriate here.  Maybe more so since it's a recipe.

I love rhubarb.  It's easy to grow organically, no hassle, and tasty food.

Rhubarb is one of the few perennial kitchen garden plants.  It's ready over a much wider time than most fruits, and can be combined to nice effect with a variety of fruits. 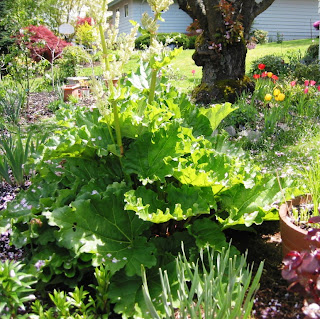 Not all rhubarb is the same.  I have 3 plants.  One is "Victoria", a vigorous green stem variety.  Some of the catalogs picture Victoria as red.  That's either marketing, or there are different colors depending on where/how grown, or there are variations of the variety.  My Victoria is quite sour, not very sweet.  Another is Valentine which has red stems inside and out.  It isn't very vigorous, but the flavor is much more sweet, with less tartness.  Another is unknown, redder, sweeter, and even less sour.   There are many varieties.

I liked how this rhubarb crisp came out.  It was very easy to make.

Combine all of above in a bowl, coating all of the rhubarb evenly.  Spread into 8X11 glass casserole dish.

stir up and sprinkle evenly over the rhubarb mixture.

The second time I made this, I replaced half of the rhubarb with black cherries.  Different flavor, equally good.

I also saw a recipe for rhubarb syrup.  Maybe next weekend I can use it on pancakes.

This is the best site I've found for rhubarb botany, history, lore, and recipes.

There's always rhubarb pie....  these pics from a pie I made a couple of years ago.  And will again. 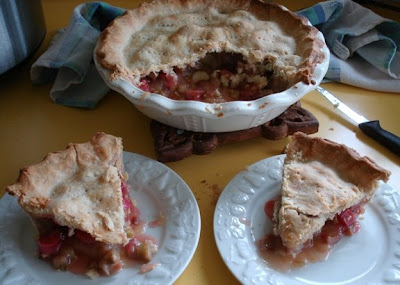 That's some time soon as well.  I use about 1/4 less sugar than the original recipe calls for.

Off the plant.  This was Victoria Rhubarb. 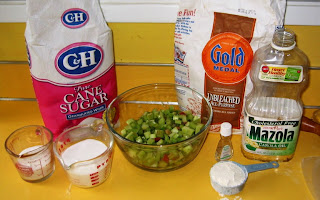 1 1/2 cups sugar, 1/3 cup flour, a squeeze of lemon juice, 2 tbsp butter.  I used vegetable oil instead of butter and added butter flavoring, here, but now I think I would just use butter. 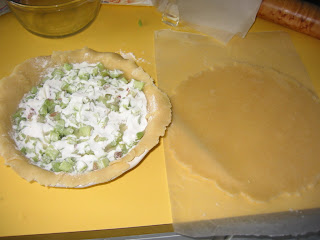 Into the pie shell - I use a vegetable oil crust 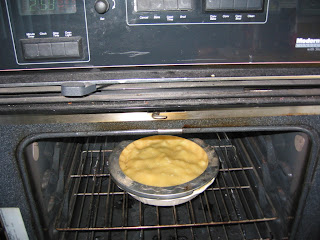 Into the preheated, 425 degree oven for 15 minutes, then temperature is reduced to 325. It took 50 minutes until the crust was brown and juices bubbled up through the fork slits in the top.

I like using the flour to thicken, instead of starch.  More like what I grew up with.