Dedicated to the study of the benefits and consequences of the Cannabis plant. For serious discussion only. Illegal activities will NOT be tolerated.

The Fed's Bow Out on State Marijuana legalization

Heavy marijuana use by adolescents may interfere with brain development

You need to be a member of Legalize It! to add comments!

Comment by tom sarbeck on January 28, 2017 at 8:36pm
In Phoenix in the 70s we called it pot. I smoked it once but, like tobacco smoke, pot smoke irritated my eyes. I liked pot cookies.

Happy 4/20, everybody!  Please see my blog post at http://www.atheistnexus.org/profiles/blogs/happy-4-20.

I sent the following letter to the Keene (NH) Sentinel:

I never thought I would see the Berlin Wall, the seemingly permanent artifact of a grim and vile police state, crumble -- but it did.  I experience the same amazement at the rapidity with which 70 years of insane marijuana prohibition (almost 800,000 arrests each year) is falling apart today, one state at a time.

The feds will give up when they realize that (i) they have no constitutional authority over intra-state commerce, and (ii) state law enforcement will no longer help them – while solid majorities of the population favor decriminalization.

I never thought I would see it, but America is a land that can change unjust laws, sooner or later.  There’s even talk that the Republicans can reinvent themselves by coming out for legalization and attracting huge numbers of young voters.  I’m not holding my breath on that one.

I am delighted that we now have medical marijuana, and I congratulate Gov. Hassan and all the legislators who made it happen.

Now: can we take the next step in cannabis enlightenment?

What I mean is that now is not the time for legislators to play doctor or bio-ethicist and decide whose suffering is the most deserving of relief.  That is simply cruel.

Why, for example, did I not see “chronic pain” on the list of admissible conditions?  Would lawmakers prefer that people suffer?  The effectiveness of cannabis in alleviating pain is well documented.  I’m sure any legislator afflicted with chronic pain would want that condition to be included.

And if chronic pain, why not occasional pain?  If glaucoma, why not ocular hypertension (a precondition)?  And why not stress management and depression?  There’s a lot of evidence that the psychoactive benefits of cannabis, properly employed, have medicinal value, and far fewer side effects than Paxil.  In the 19th century, tincture of cannabis was a remedy for “wedding night jitters.”

As erstwhile activist Denis Peron put it, “all marijuana use is medical.”  Or, in the words of one of many songs dedicated to the herb, “exactly why is it a crime to get high?”  (Of course, decriminalized cannabis would be illegal for kids – why do I even have to say that?)

Of great interest in the sea-change is the public admission of CNN’s Chief Medical Correspondent, Dr. Sanjay Gupta,  that he had mouthed the government line about cannabis (no medicinal value whatsoever), until the evidence of his own eyes convinced him otherwise.  He now thinks it a shame that the plant’s many benefits are denied to so many people.  He mentioned “thousands of years” of medicinal use, with no toxicity or side-effects.

New Hampshire legislators should now be looking at how Colorado and Washington are implementing decriminalization models and then craft similar legislation for us here in the land of Live Free or Die.  The Berlin Wall didn’t crack – it came down completely.  It crumbled into a million pieces.  That’s what should happen to marijuana prohibition. 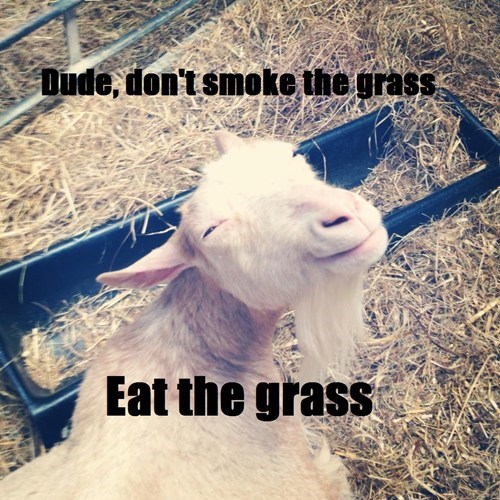 Hi Bobbie and welcome to A/N!  I have been an atheist and NORML supporter my whole adult life.  I agree that you have to "live as if."  I made that decision a long time ago, and it's worked out well.

Hi there! I am new to Atheistnexus, and I am not online much.

I am also on FB, Ravelry, and I have a wordpress-blog.
http://Unitesense.wordpress.com
I do not consider myself a "weak" Atheist simply because I am NOT 100% Sure that God-Gods-Goddess Exist or not. I simply say I don't know, but I live my life according to the "natural laws" of this planet, NOT the bible written thousands of years ago when people "knew" the earth was flat.

If you can imagine slow, sarcastic applause..that is my response to NH's (motto: "Live Free or Die") meager medical marijuana bill.  Tight control. You have to be dying to get it.  I guess a lot of people are at death's door in Colorado and Washington.

Here's the letter I sent to the Keene Sentinel.  They didn't print it, probably because they've already published me twice on this subject.

I read, with clenched teeth and an aching heart, of yet another re-enactment of the marijuana debate in this land of live free or die (“A division remains – Medical marijuana gets House hearing,” Sentinel, Feb. 22, 2013).

I have lived here for two years, and all I can say to you opposing legislators and regulators and naysayers is: What is WRONG with you people?  Eighteen states have allowed the medical use of marijuana, and two have outright legalized it.  There has been no rise in the death toll from marijuana, which is currently zero.

And still you stage the same grotesque little drama.  The suffering, the wasting-away, the dying, the people in such pain that nothing else works – they attend your hearings, they appear before you in their misery, and instead of compassion, they hear the same heartless arguments:

-- “It has to go through the FDA.”  No, I would humbly argue, it does not.  That process is for new drugs (and even then, thousands die each year from prescription meds).  The medical benefits of marijuana have been validated by millennia of experience.  If it did not relieve suffering, do you think it would for so long have been such an integral part of the pharmacopoeia (including use, in the 19th century, as a treatment for “wedding night jitters”)?

--“There are current legal drugs available.”  No, there is unfortunately no substitute for nature’s very complex mix of chemicals.  I wish everyone who says this would contract a horrible disease from which only marijuana provides relief.  How dare you tell people they must suffer or be criminals?

-- “We need tight regulation and very limited use.”  Oh, please.  Two states have LEGALIZED it. New Hampshire should be a leader in this area.  Or does the state motto apply only to firearms?  Why are you opponents so worried about adults feeling better by consuming cannabis at their own discretion, as with the currently approved intoxicants?  Just add another room to the state liquor stores; it’s no big deal.  As erstwhile activist Dennis Peron said, “All marijuana use is medical.”  He’s right: it does a better job than many drugs, from painkillers to anti-emetics to anti-depressants.

-- “It’s still illegal at the federal level.”  So what?  That didn’t stop Colorado and Washington.  The politicians in DC are followers, not leaders.  The same thing happened with alcohol prohibition: it ended after a few important and courageous states led the way.

Is New Hampshire really the land of live free or die?  Now would be a good time to show it. 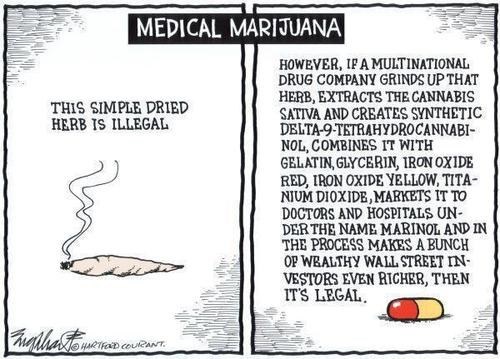 Hey, everybody, we're going to have medical mj in NH this year!  (The last New England state to have it.  "Live Free or Die" -- what BS!)

...yeah well.. fundamentalist life or whatever cult crap is the gateway to stupid and annoying as mosquitoes by canal!