"I find the opinion of these women infinitely more compelling than those of the Molester-In-Chief and his craven enablers in the Senate."

I bridged the era from my grandmother's time to the present day. I saw the unequal treatment of women and the fact that inequality was present in the family and also in the political climate of the nation. Inequality in a Dominator Society meant assault of female family members was sanctioned by the elders and by the laws.

I came to adulthood in the late 1950's and challenged the attitudes, beliefs, customs, traditions, and values of the post-WW II Era. I, and others like me, faced outrageous assaults on our characters, bodies, and ideas. I heard just about every foul name you can imagine and I even experienced a billy club hit over my skull while in a peaceful protest march.

Businesses didn't want equality for racial minorities and women because it would "cost too much" to pay us comparable wages. We would desire to be on an upward ladder to management based upon our quality of work. We could even demand that women have the right of control over their own bodies.

My generation broke the glass ceilings, my daughter, daughter-in-law, granddaughters, and great-granddaughters suffer the effects of "blowback" in their generations.

We knew our work would be difficult, that we would find opposition from even our loved ones, the political climate would be formidable, and we would suffer emotional and physical pain.

We have mighty shoulders on which to stand. Our Foremothers suffered mightily and we must remember our history.

Our demands are equality and fairness. That asks too little of our generation.

Benefits accrue to all who learn how to live in a Partnership Society.

Joan, your opening post here is one for the ages.

Ms. Ford has already earned the gratitude of about two-thirds of Americans. (There may always be about one-third who want or need what today’s GOP offers.)

Thanks for the link to Partnership 101.

“Dr. Blasey’s resistance to appearing before the Senate Judiciary committee on Monday seemed to galvanize Republicans and drew wavering Republican senators back into Judge Kavanaugh’s camp.”

Joan, those “wavering” Republicans were not wavering; they were lying.

A lie lowers the heat. Their eventual vote to confirm will testify to their weakness, if not to their ASPD, aka sociopathy.

What woman would EVER come forward to face scorn, ridicule, derision, and death threats, purely for the notoriety?  Ms. Ford does not strike me at all as someone who is out for her Andy-Warhol-15-minutes, regardless of what the Republicans in Congress may say, and this doesn't even mention the statements of a few of them, attempting to excuse Kavanaugh's alleged behavior.  What this wants is a suspension of the confirmation process, while the FBI does their due diligence, and THEN have Ms. Ford appear before the Justice Committee, there I sincerely hope to SEAR the ears off of those who would dismiss her assertions out of hand.

We did Anita Hill once, and we blew it.  Can we be bothered to learn from our mistakes?

Our Senators need to keep hearing this message!

Colbert has a way with words!

Kavanaugh lied about getting into Yale by merit. His grandfather wa... 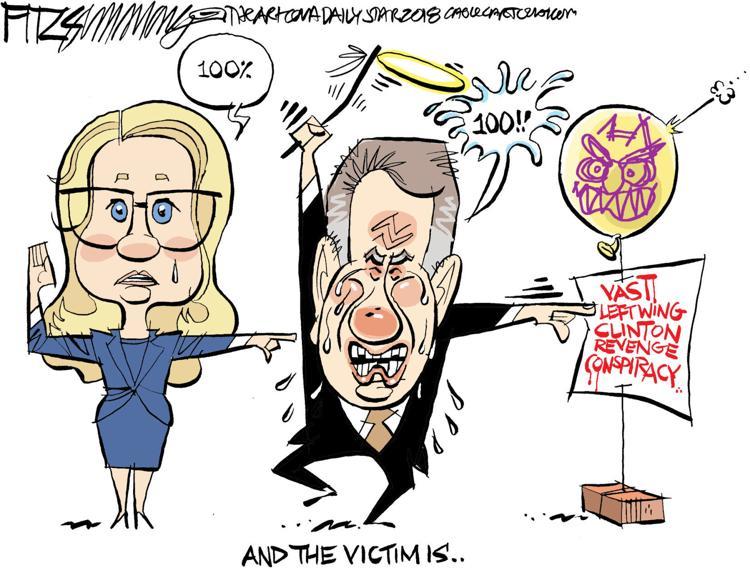 "I have no connections there. I got there by busting my tail."

~ Kavanaugh, translate, one who perjured himself.

"The Great Whiner!" Shall we offer him cheese with his whine?

FBI tonight contacted one of Kavanaugh's other accusers to schedule... Friday September 28, 2018

"I’m 55 years old, and the thing that really got me this week was that the culture we faced of women not being believed, being too scared to report assault, knowing it’s likely nothing will happen if we do speak up — that nothing has really changed."