The Skeptics' Guide To The Universe

"No skeptic, to my knowledge, ever made a major scientific discovery or advanced the welfare of others."

"The most exciting phrase to hear in science, the one that heralds the most discoveries, is not "Eureka!" (I found it!) but That's funny..." -Isaac Asimov

The scientific world view is full of awe and wonder. Understanding how truly awesome the universe is – in its elegant complexity, its staggering beauty, and the many intricate systems of which it is comprised – gives a profound feeling of connectedness and sparks the imagination. And it has the advantage of being real. -Steven Novella

The glory which is built upon a lie soon becomes a most unpleasant incumbrance. How easy it is to make people believe a lie, and how hard it is to undo that work again.
— Mark Twain

US Distrust of Facts

When Lying Sounds Like a certain kind of Honesty

Changed by the Attention Economy

You need to be a member of No Nonsense to add comments!

I would like to see LGBTQ take on the ownership of formerly religious property. If they used proper engineering techniques to keep the heating costs down, and also enjoy the strength of well-built buildings, we all gain.

I like the idea of art galleries, concert halls, community gathering places, and conversion to private residences. I also like the idea of demolishing structurally unsound buildings and creating low-income housing, and even shelter for the homeless.

It is outrageous that there exist homeless individuals and families in this era of wealth. Spokane World's Fair of 1974 offered the image of robots and machines taking on the role of performing the work. Another theme was leaving leisure time for everyone able to earn a living wage. With a shortened work-day and fewer work weeks in the year, more people could make a living wage. The standard of living moved the poor into the middle class, eliminating the category of people who usually live below the poverty line.  More people earning incomes would put more money into flow. Workers would have the ability to afford decent housing, healthy and adequate food for all, access to education and healthcare, and retirement plans that people could live out their elder years in safety, security, and stability. Fathers and mothers earned enough to live decent lives even as they enjoyed the benefits of leisure time.

Growth after WW II meant more businesses and industries, with more workers, most with skills requiring training and education. This period used quantitative measures for success, without thinking of the cost to individuals in stress-filled jobs, high tension in homes, and splitting back into the wealth gap that devastates society in the late 1920s and 1930s.

It took WW II to get the nation growing again, but this time, 1974, there was a hint of concern for the environment and a culture that provided less stress to individuals working in businesses and industries. The desire to protect the Earth emerged with a desire for technology to do the work and allow the people to have more leisure time.

That is what I saw in Spokane's Worlds Fair in 1974. Qualitative measures counted in the ratio of success. Let machines do the work and give workers more leisure.

That vision failed. Not only are workers worn out, but management also is stressed out as they walk that tightrope of quantity vs. quality measurements. Again, the wealth gap grows along with discontent.

What is the remedy? Brewing tanks instead of an altar. Nice! 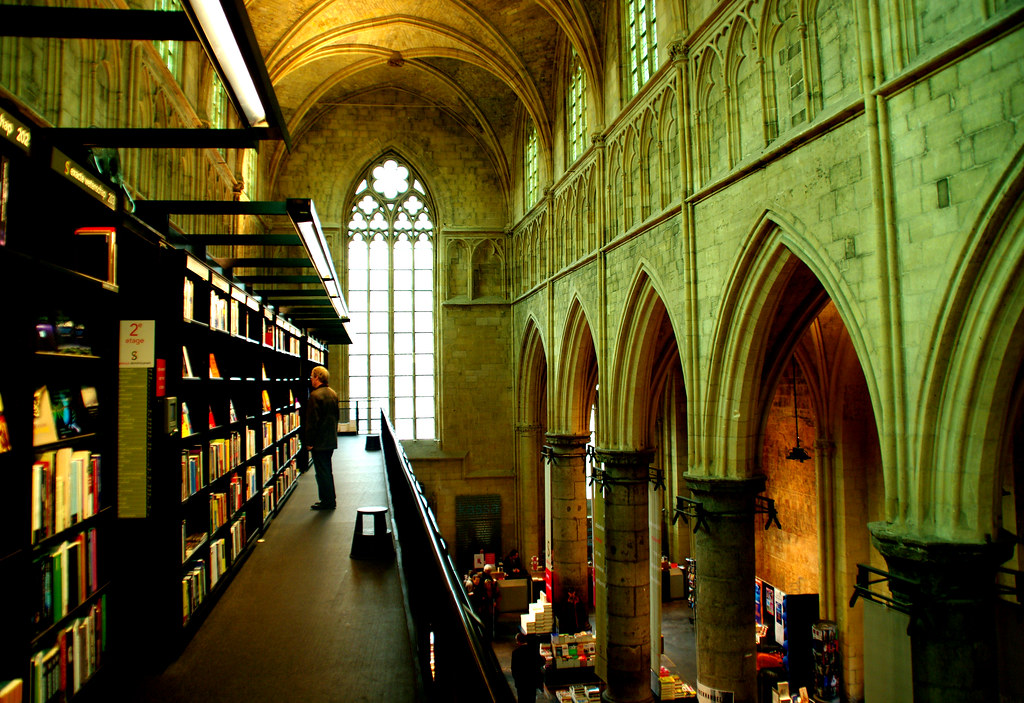 Also from the Friendly Atheist comments: (((Hornèd Pontilibratificus))) wrote about the challenges of keeping heating costs reasonable in high-ceilinged spaces:

There are some good techniques for combating this problem. You can use both traditional radiant heat and in-floor circulation heating, coupled with down-draft ceiling fans. All that really brings the heating costs down. ;-)

That would be a good step.

Putting them to much better use, is a plus.

I just read about the large numbers of Canadian churches predicted to close, over at Friendly Atheist. Commenters there shared pictures of a spectacular conversion of a church building to a private house... ...and a pointer to the Church Brew Works restaurant and brewery in Pittsburgh, Pa., where the place of pride now offers a much more tangible benefit to people, in the form of brewing tanks: