As always, you can also read this and comment at Good Reason News. Thanks for reading. 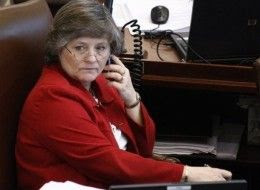 According to Tulsa World, a state… Continue

50 Voices of Disbelief, an interview with Russell Blackford and Udo Schuklenk

Have you ever wondered why Michael Shermer is an atheist, or Margaret Downey, or J.C. Grayling, or James Randi, or Victor Stenger, or many other well known atheists? You will be able to find out this coming fall. The new book “50 Voices of Disbelief: Why We Are Atheists” by Russell Blackford and Udu Schuklenk is a collection of essays by some of the most prominent on why they are atheists. Inspirational stories and philosophical monologues will provide a doorway into the author’s life, and shed… Continue

Public Enemies: Worth Looking At, Not Worth Watching

Based on the true story of a notorious depression-era bank robber, Public Enemies brings the crime spree and police hunt of John Dillinger to the silver screen. In a film that desperately attempts to provoke any emotion, Public Enemies fails to capture the imagination, create emotional dimension or shock the senses.

In 1933, during the height of the Great Depression, John Dillinger (Johnny Depp) and his crew crisscrossed the country, robbing banks and became folk heroes. During an… Continue

I am taking a little trip to Pennsylvania this week for a family reunion where I know no one, and I have been dreading this trip for so long. To make matters worse, my cousins have cancelled on me and now I'm making the drive alone. I have been pretty bummed about the entire affair until a little idea popped into my head. I said to myself, "Self, you should stop by and check on Ken Ham over there in Kentucky." That is what I'm going to do and hopefully I will be able to find that dinosaur with… Continue

70 Paleontologists attending a convention in Cincinnati decide to visit the Creation Museum. 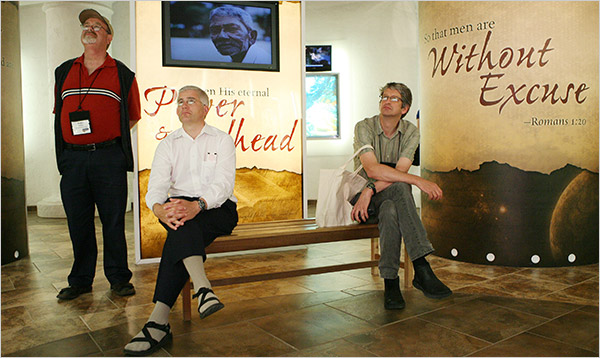 PETERSBURG, Ky. — Tamaki Sato was confused by the dinosaur exhibit. The placards described the various dinosaurs as originating from different… Continue

When it comes right down to it, we have so little verifiable information about the comprehensive context of our own existence that using the word ‘reality’ with conviction is laughable. Maybe that is the one thing theists have over non-theists. It is possible that the word ‘faith’ is a humble acknowledgement that we are so doomed to such a high degree of ignorance about what is actually going compared to the tiny fraction of a degree we can be absolutely sure of that we really can’t tell the… Continue

"Where does a rainbow come from?"

The other day, someone i'm very close to had just found out i'm an atheist. So she looked at me and said, "Katie, where does a rainbow come from?" I know it has something to do with the sun and a prism of colors, but i dont know everything about it and I don't know how it works exactly, so I took a moment before I answered. Seeing that I didn't answer right away though, and seeing me ponder it, she isaid , "see? Nobody knows. It's god." And I said, "No, its just a prism of reflecting light and… Continue

"Happy shall he be, that taketh and dasheth thy little ones against the stones." Psalm 137:9

I sometimes see this quote used by my fellow atheists to say, "See, how horrible religion is?" I agree that most of religion is horrible, but it is not the origin of such things as "bashing thy little ones." It has merely incorporated such things. The origins are far older than any religion...…
Continue

Last night on Countdown with Keith Olbermann, Keith, as usual, presented his "Worst Person" segment. An atheist was honored by coming in number three (bronze) on his list. (We are assuming the person is an atheist. After all, we don't really know for sure, do we?)

Amherst, NY – Good times come to an end with a speed of light. Before you know it good-byes begin to fill the air and new friendships begin to turn into Facebook requests. After three days of reason and delightful, in-depth conversations about life, God, evolution, college, and gossip from the night before it was time to depart and return to the real world.

This week, Franc and I go over our hour a few minutes going through Revelation, page by page, trying to make sense of it. We also talk about the fantasy of The Corporation (see the movie, click the link) and mention Franc's blog, Check Your Premises.

AN — I originally posted this at my blog Good Reason News, where it looks like a theist as read it and called me "thunderously ignorant." You know, I don't think I'm wrong to call religion suppressive to thought and reason, but I didn't make a great case for that here. Guess I forgot I always had to be airtight. For his comment and my response please see the… Continue

Morals came from some where.... so they must have came from God!

98% of theists (don't ask where I got those statistics. I don't know.) I've talked to for some reason think this is an end-all good argument, when it really is a poor one.
They usually start out by asking if you believe in good and evil. My answer is yes, with a but. Yes but...people aren't all good or evil. Good and evil are very vague and broad terms, especially the word good. The idea of Good and Evil isn't the same for all people, but generally most people living in the same place… Continue

We had the first Kansas City Recovering from Religion picnic with 34 in attendance. It was a booming success. People came from as far as Columbia and Missouri and Topeka, Kansas. See the RR website for photos and details. Greg Lammers, head of American Atheists of Missouri attended with his family driving all the way from Columbia.

How as an atheist I cope with tragedy.

My mother had a and stroke because of an aneurysm about 2 months ago. She's currently in a coma, with sever brain infarct damage and her prognosis is not good. So, what do I make of all of it? Well, thank God I am an atheist. I can't hardly think how I could cope with this better if I were religious.

More than anything, it let me be calm about this tragedy. I don't blame anyone or anything for this. I know that our bodies are imperfect, that to die is part of all living creatures,… Continue

Gold crown for baby jesus or help those in need.

I have reproduced the article because I fear that I will be taken down. I noticed it on 30 June 2009.

Proof Jesus Was Not God

Well there you have it. Right from the mouth of the man himself. Jesus admitting here through his answer that He wasn't God and, rather shockingly, that he considered himself less than “good”. That would… Continue

FLorida Atheists and Secular Humanists (FLASH) has put up a billboard on the corner of NW 27 Ave and Sunrise Blvd. in Ft Lauderdale. This is the start of a campaign to counter the negative image portrayed of "non-believers".

The American Atheists has announced that it will be lowering its membership fees. The new rates, which will be available beginning July 1st, are being offered to help the organization to increase membership, to encourage activism, and to raise more money to fund their activities.

I had an op-ed piece published in the Greensboro News and Record on Sunday, June 28. Here's the link if you'd like to read (or see below).

There have been few responses thus far, and nothing unexpected.

Taken from the N&O web site:

Is there a place for atheists in America?
SUNDAY, JUNE 28,… Continue