Guitar of the Flying Spaghetti Monster The guitar was created by Steve Duerr (right) with help from Craig Gosling (left). Craig is also at writer and has a blog at graygoosegosling.com.

Pastor Mike is a Back Seat Driver

Disclaimer: I'm a former Christian who is now an atheist. I have nothing against most theists and respect their beliefs - up to the point where they step on mine. However, even in my Christian days I would've been appalled by the hubris of this plan.

Have you missed any past episodes of Ardent Atheist? Dave Foley, Tim Minchin, Richard Dawkins Neil deGrasse Tyson and more!

Ardent Atheists Emery Emery and Heather Henderson talk with comedians, actors and friends about atheism, deism and the effects of religion on us all. Guests of the show are a mix of atheists, agnostics, deists, scientists, humanists and the occasional god-loving, scripture-quoting crusader. Discussions are deeply impassioned, mostly respectful and always funny.

Thanks for the warm welcome. :)

Hi Guys, thanks for the warm welcome. I tend to be a bit turned off by the implication that we "have it right" or are "the holders of the truth" or any of that stuff and so I am hesitant to join groups here just yet until I figure out the culture of said groups. I'm an atheist/agnostic, though I tend to hate to define myself in the theist terms of atheist. Indeed, I don't like to reference "God" or "gods", I feel like *for me* it is enough to just live a life mostly free of magical thinking… 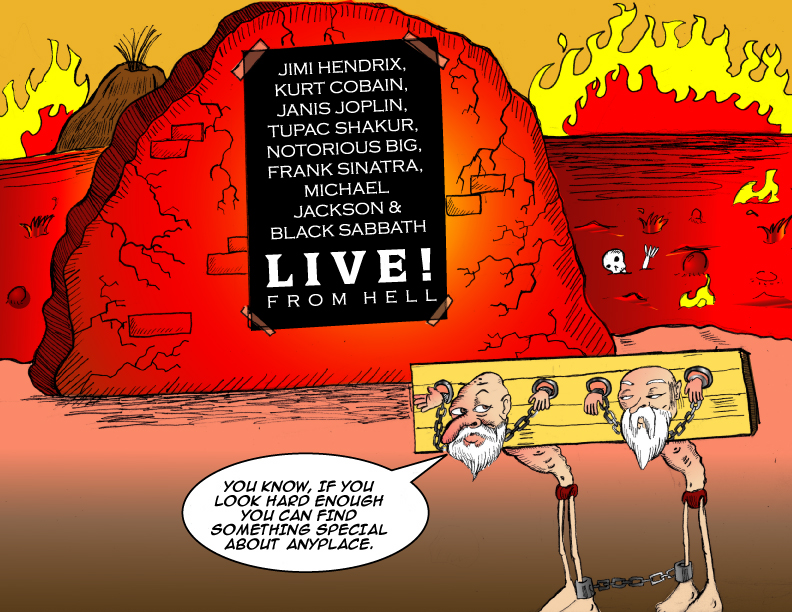 Sure, God probably gets all of the jokes here. How about everyone's second favorite imaginary place?

It is clear to many members of the atheist internet blogosphere that there is a noticeable gender disparity among participants in atheist activities (fora, blogs, comments, readership) online.  Two quick examples will illustrate. As of 6 May 2011 only 27% of Atheist Nexus (A|N) membership is…

So, yesterday I attended a convention for women that celebrated women leaders and is also used to inspire other women. Sounds good, does't it? I am sure that most of the ladies who attended it, did enjoy it, but the only thing that I enjoyed was the food - the whole thing felt like I was back in church. Women declaring their faith in god and how good he was to them - and the whole time I wanted to say to them: it was YOU! You did what was achieved. The 'glory' is yours, because you worked…

The glory of sin!

Timothy Keller informs us that we can get that true happiness by acknowling that we are sinners! God would then take away that guilt of sin and make us truly happy. We must never tempt Him by sinning, but we'll sin and get that absolution. When bad things happen, we can still have happiness as knowing that He loves and protects us.

As His own  son,  [amongst His others who had children by… On Aug. 11, just days before Texas Gov. Rick Perry told a boy in New Hampshire that "in Texas we teach both creationism and evolution," the Texas Education Agency sent a memorandum to the State Board of Education finalizing approval of scientifically accurate teaching material for use in Texas public schools.  Evolution, dismissed by Perry as "a theory that's out there" with "some gaps," is presented as sound science in Texas textbooks and supplementary materials. First of all, it is clear that… Continue

Thoughtful, entertaining: Help this page get off the ground

A friend of mine has been blogging for a brief while and I thought some would enjoy his work. His ideas on philosophy are quite intriguing.

When it comes to morals it seems that Christians never get above the belt-buckle unless it is to peer behind a brassiere. Genes for sexual obsession passed down from the Catholic Church evidently have not mutated over the centuries as Christian leaders remain overly concerned with who's doing who, how they are doing it and if there are any naked people or pictures anywhere near.

To be sure there is a need for watchdog organizations and laws keeping dangerous sexual predators, perverts…

My son, a funny and sweet 10 year old, is moderately autistic. For those who do not understand what that means, his ability to communicate with others is impaired to the point of having the verbal equivalency of a five to six year old. Abstract concepts are completely foreign to him with every single object, act and word having literal meaning. This is not to say that he does not posses intelligence, however, what it does imply is that when he learns something, it is the physical or visual and… Continue This week's news in skepticism:

In our top story, the Arab spring has reached a new level of success for freedom and democracy in the Middle East when the regions most violent and oppressive dictator, Allah, was captured in a bloodless coup. The disposed deity was tried at The Hague for crimes against humanity.… So I'll fly to Spain in either February or March of 2012, volunteer for about a month, and then bike the pilgrimage trail, the Caminho, or Way of Saint James. I'm preparing for about two months. It'll be an adventure unlike any I've yet done!
Saint James is the patron Saint of travelers.…
Continue

The truth to why i don't believe.

first off, sorry i haven't been on this site for awhile, been busy with school >.< anyways...

I know i told everyone here that im an atheist, it was like being a virgin and you people being my first time, and thanks to that, i was able to tell everyone around me that i was an atheist. Many found it a disappointment of course, but eventually understood that it is what i "believe" and im never going to give in anymore the religious stuff again. But, a family member of mind,… Continue

Why suffer the oxymoronic obfuscation of theism?

Why  should one beieve or disbelieve in the supernatural?

What counts as evidence for it? We naturalists-rationalists find none. Why, none can present it self, because that would go agianst our conservation of knowedge. Nature presents no divine intent as Lamberth's teleonomic argument notes and thus cannot affirm His very existence but can affirm that no divine intent presents itself…

Why Do People Believe Different Things?

Answers In Genesis aren't really answers at all.  I'd rather drink a gallon of boiled elephant diarrhea while having sex with a cactus than read another one of Ken Ham's logical disasters.

photos of the building structures at Khps to undergo renovations

Kasese United Humanist Association in its school project is going to add P.7 Class at Kasese Humanist Primary school. A fund raising or material donation drive is currently in progress with an exercise aimed at renovating more rooms provided to the school by our landlords onbehalf of Uganda Railways Corporation. The units are rented to the school at a subsidized rate.

Well wishers and Friends of the school are requested to donate like they did in the first phase. The school project…

Joan Denoo replied to Joan Denoo's discussion Save lives or the Economy?
14 hours ago