Marriage is religious and mysogynystic.

Religion is so influential that even atheists talk about marriage as though it was normal. I've added some more details to the main page of AtheistInsurgency.com and in the process began to think about why government has such a strong hand in marriage.

Marriage is a religious institution, is not congruent with nature, allows the government to apply privileges and penalties to married couples that unmarried individuals would not… Continue

More reason to get rid of religion:

This is not surprising to me. Lying and deceiving the public are religion's national past time. These are the tactics pastors and priests etc, relied upon for years and are still relining upon to pull millions of followers into their fold and, as a result, cashing on billions of dollars.

More reason to get rid religion:

Klara Mauerova, 31 - a member of a sinister religious cult '....tortured her son in a locked cellar while relatives skinned him and forced him to eat his own flesh....'.
According to the news report 'The two boys had told judges how their mother and relatives had stubbed cigarettes out on their bare skin, whipped them with belts, and tried to drown them. They were also sexually abused and… Continue

More reasons to get rid of religion:

It is often argued by "moderate Muslims" that the Qur'aan and Islam do not teach nor promote hate and terrorism and those who do so are not real Muslim; They are just common criminalizes. However, that is not true. Allah and the Qur'aan promote killing other people whom they termed 'non-believers'. Allah himself gave these Muslims the license to kill dis-believers. According to the Qura'an translated by M.H.Shakir, in Sura 47:4, and I quote… Continue

Let us examine knowledge and its functions as well as its capacities and dimensions. Knowledge requires a platform to operate, which called language. As a beginning, will it not be easy to explore what we speak and write? How do we acquire linguistic skills? Is not the word an abstract entity all by itself? Finally, are we using the word or used by it?
To think of thinking is the need of the day, but do we know what thinking is or do away by the process itself? Word is a window to its… Continue

The economy had hit every one and some it hit like a ton of bricks. For Infidel Guy it hit like ton of bricks. Cause of the economy and his atheism he is having very hard time finding a job and cause of a raw deal with his landlord he can't keep his apartment. The future of th Infidel Guy show is uncertain so if you have some extra money and you like the show please donate (go to Infidel Guy.com an look for the "donate" button), every little but will… Continue

"You doing all right?"

The nurse smiled. "You'll be fine. We're a well-funded institution, and we're doing OK for technology."

Somehow, for some reason, I was not reassured.

The mask was fixed on my face and I felt the cool injection of anesthetics into my IV line. "Breathe deeply," the nurse said. "And relax."

Someone else came in the room, a woman.

“If we go back to the beginning we shall find that ignorance and fear created the gods; that fancy, enthusiasm, or deceit adorned or disfigured them; that weakness worships them; that credulity preserves them, and that custom, respect and tyranny support them in order to make the blindness of men serve its own interests.” Baron D'Holbach


Natural Morality:
If human morals and values do not arise… Continue

“If we go back to the beginning we shall find that ignorance and fear created the gods; that fancy, enthusiasm, or deceit adorned or disfigured them; that weakness worships them; that credulity preserves them, and that custom, respect and tyranny support them in order to make the blindness of men serve its own interests.” Baron D'Holbach


Natural Morality:
If human morals and values do not arise… Continue My fave indie music label Serious Business just released their latest album by the band Secret Dakota Ring. You can watch the video for the decidedly nifty single "The Fade to Black", download an MP3 for free if you like the song or better yet buy the whole album and thus support independent music by clicking here:… Continue

Society in a Squirt

I am a sucker for learning new things. That is, some new things. I sometimes willfully ignore learning how to do something so I don't have to do it in the future. Working in an automobile dealership provides ample instances of things I never want to do or learn to do. But this is about something new I learned. I was reading a discussion (http://www.atheistnexus.org/group/atheistexecutives/forum/topic/show?id=2182797%3ATopic%3A97530) a while ago and one of the posters used the abbreviation: viz.… Continue

On the subject of Glarbism 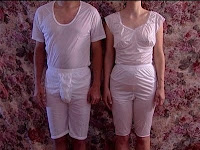 I was recently reminded of glarbs on Bronze Dog's blog. I find the Glarbism phenomenon fascinating.

Have you ever met a Glarbist? I haven't, but nonetheless, I still find Glarbism fascinating.

I've got a good debate going on my blog, www.createcognitivedissonance.wordpress.com, regarding Homosexuality and Prop 8. I've had a New Church minister attempt to defend his position on homosexuality, and the comment lines have been full of a very lively back & forth. Check it out!

Tray Tables Up! Flights of nonsense landing in Texas schools

The next act in the long and ugly creationist end-game will take place in Texas. After the previous two acts, my confidence is high.

One of my dearest hopes for the next generation is that they get a real shot at understanding evolution. My own teenage understanding of the theory was fuzzy around the edges, since we touched on it for all of about eight minutes in high school. I didn't encounter it again until Anthro 1 at Berkeley--at which point it dazzled me so much I… Continue

I am looking for someone to go to see Religulous and some fun discussion about Religulous afterwards tonight.

Anyone live in the bay area looking for someone to go to the show with. I can't take my friends to see this because everyone I know is religious. I feel like an island.

Kill my blog? No!

Its been a while sense I posted anything so why not start by defending blogging.
I read an article in Weird called "Kill Your Blog". (You can read it here (it has a different name which made it hard to find)) His arguments are that that blogging has been flooded by "Cut-rate" journalists, underground marketing campaigns that are "drowning out the authentic voices of amateur wordsmiths" its hard to get readers,… Continue

Faith of the arrogant
Where is the arrogance in
Judging the world owes me no deference
Accepting the earth, sea and sky stand in indifference
Seeing no grand schemer fixated on my every move
Believing ones only support comes from within
Expecting nothing because nothing is owed, giving nothing when nothing is earned
Doing what's right without need or assumption of external approval
Exchanging with equals to fill needs
Being honestly, always and… Continue

Nilknarf Daily Haiku
And there are those times...
that you need to sit and think;
stop your life and think.

It really feels weird to be writing this.

I'm going to be on hiatus for a coupla weeks.

I will be reading e-mail, and following the journals that I always follow, but after thinking about yesterdays' entry, I'm going to break the news habit, and the writing habit...… Continue

Now to be perfectly honest I have 2 other blogs. I have my live journal, mostly because my brother does and he's in Korea. I also have my myspace blog...which is my main blog. I don't think I really feel comfortable there anymore. One of my "friends" recently told my husband he had "loose morals" because he didn't have jesus in his life. I feel more comfortable here. I'm kind of excited to see what other atheists might say about my views without being attacked for my lack of faith.