Representing Ron Williams in the court action will be high profile barrister, Bret Walker SC (Senior Counsel). The importance of having the case represented by such a… Continue

"Is This It?" Awesome Atheist/Science Video

What Julie asked Richard. from Embiggen Books on Vimeo.

I've been to quite a few freethought conferences and events this year and this has been my favourite one to date. I'm so glad it's up on video now so that I can share it.…
Continue

Thanks to Nexus members Karen and Luke for this great video on our local group's experience at the Global Atheist Convention.
Highlights - PZ Myers getting up close and personal with two of our gorgeous Sunshine Coast heathenettes, and Warren Bonett from Embiggen Books getting something of a man-crush on AC Grayling (after Grayling offered to do a book signing at Warren's…
Continue

We Have a Lot of Work to Do as Atheists

Bear with me now. This is not going to seem relevant for a while, but I do have a point.
The Melbourne Atheist Convention is just two weeks away and there is a flurry of dieting (not just women either!), clothes buying and hair fluffing going on in anticipation of meeting people we've only met on line and who, we fear, think we are a lot more attractive than we actually are! I have a feeling that Australia's spanx sales have gone through the…
Continue

When I first joined Atheist Nexus, for personal reasons, I decided to do so under a slightly altered version of my real name. Circumstances have now changed and I think it is appropriate that I change my profile name to my real name - Chrys Stevenson.
I hope this won't cause too much confusion, but I have found keeping two identities on the internet is becoming unwieldy and unnecessary.
Chrys

Tickets for The Rise of Atheism, 2010 Global Atheist Convention are now sold out! The Convention, to be held at the Melbourne Convention and Exhibition Centre 12 - 14 March 2010, has attracted substantial Australian and international interest… Continue

Vote for Science versus Quackery

Twitter is currently taking votes for the best contributors in various categories.

In the area of 'health', the quack and anti-vaxxer, 'Dr' Joseph Mercola, has taken the lead over Australian doctor and skeptic, Dr Rachie (sister of Atheist Nexus member and well-known skeptical blogger, Podblack). Podblack (aka Kylie Sturgess) is also the co-MC for the Global Atheist Convention in… Continue

Atheist Convention Melbourne - Are You Coming?

If you're a member of Atheist Nexus and will be attending the Global Atheist Convention in Melbourne in March, you may wish to join us at the Atheist Nexus table/s at the Saturday night gala dinner.

If so, would you please email me ASAP (like now!) at atheistnexus dot australia at gmail dot com with your name and the order number which appears on your Convention confirmation email.

Christmyth Wishes from Australia - To My Nexus Friends

From Australia's Carols by Candlelight, Melbourne, Australia. Here's a Christmas wish we can all share.

The denial of funding to the Atheists Convention is further proof of the Government's courting of the religious right. Photo: Andrew Dyson [Illustration shows cruxifix tied… Continue

Late yesterday, the Atheist Foundation of Australia's website went down.

The following message is from the AFA's head tech, Protium:

"The Atheist Foundation of Australia server is currently undergoing a 500Mbps DDOS (Distributed Denial of Service) attack and has been null routed (taken offline). This has affected upstream providers Optus Networks and technicians are currently looking into the situation.

A DDoS is when multiple computers all request… Continue

We need your help to send this message viral on the internet!

Interest has been incredible, so if you're interested, I suggest you book as soon as… Continue

This week, the Australian Christian Lobby launched it's 'Tame the Tube' campaign, aimed at reducing sex and violence on Australian commercial television. Obviously these people live so far in the past they haven't discovered the remote control yet!

Comedian/singer, Paul McDermott, began his show this week with a commentary on Christians. Paul, an atheist, is always cutting, but I think he excelled himself with this. Remember, this is on prime-time Australian television - and note the… Continue

We pride ourselves, here on Atheist Nexus (and in other atheist forums), on being intelligent, rational, educated human beings. We also, in the main, abhor those religious views which lead to racism, sexism, homophobia and other irrational prejudices.

But, as we move forward from being a 'philosophical stance' into a 'movement', should we, can we, and, if so, how can we, distinguish ourselves from atheists who have abandoned belief in God, but not irrationality and… Continue

50 Voices of Disbelief: Why We Are Atheists
edited by Russell Blackford and Udo Shuklenk 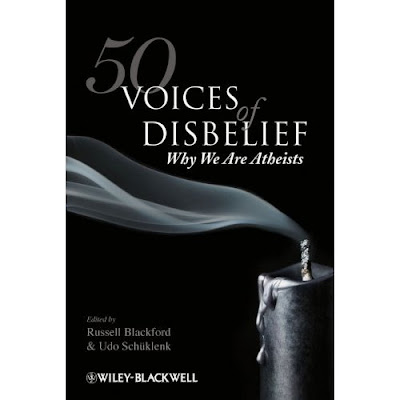 Australian Atheist Nexus member, Russell Blackford and Canadian bioethicist, Udo Shuklenk, are about to release their new book 50 Voices of Disbelief: Why… Continue

It's a long time since I've done the 'How many more sleeps?" thing, but I swear I feel like a kid waiting for Christmas.

What has me so excited? Well, it's embarrassing really. Really embarrassing. I'm nearly 51 years old and I should be excited about illicit love affairs, an exciting new high paying job, or buying a new yacht. Nope. Not even close.

Fact is, I'm looking forward to two big events coming up in Oz. The first is Richard Dawkins speaking in my home town in… Continue