A little while ago I posted an entry about very depressing PostSecret in which a wife suggested that all of her husband's troubles were the result of God punishing him for renouncing his faith. There's another one like that in this week's secrets. 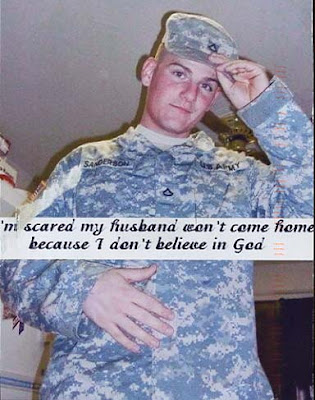 "I'm scared my husband won't come home because I don't believe in God."

It's kind of a role-reversal with this one. This time the wife is the atheist and she's full of self-doubt. The last one made me angry, but this one is just plain sad. Why do so many people think that their suffering is the fault of a supposedly benevolent God? In the last blog entry I quoted Bill Hicks but I think this bears repeating:


"The whole image is that eternal suffering awaits anyone who questions God's infinite love. That's the message we're brought up with, isn't it? Believe or die! 'Thank you, forgiving Lord, for all those options.'"

I think that it's a good example of something I see in a lot of atheists. When you're raised for so long believing in a religion, it's really hard to let it go. She doesn't believe in God, but she's still got this idea that he's up there waiting to punish her for it. I've read about a lot of people saying that the worst part about being raised religious is the trauma that comes with the idea that they or their loved ones will burn in hell.

I don't know. I can't say I can relate to this at all. It just makes me really sad and I'm wondering if/why secrets like this are common.

I can relate to what she's feeling in the sense that she feels like if her husband died in the war, she would be to blame because she would have made 'god' angry for not believing in him. I guess in a way that doesn't make her an atheist, but I sometimes feel like that too...even though I am definitely an atheist. Just that little irrational part of me (and yes I admit it's irrational) thinks 'what if this bad thing is happening to me because I refuse to acknowledge god's existence?'...

In a way, I get where she's coming from. It doesn't mean it's rational, but I can still empathize with her.

Comment by Celtix1234 on May 18, 2009 at 11:05pm
I don't think she's an atheist, she is probably on the road to becoming one, but there are still some lingering doubts. I went through about 5 years of that. I really believed there wasn't a God, and yet a part of me lived in fear that there was, and he was going to be pissed at my lack of belief. Makes no sense, I know! But when you've been so indoctrinated, it's so difficult to get past everything you've been taught as true.

That's ambiguous - on first reading it sounds like her husband might leave her because she's an atheist, but the man is wearing a soldier's uniform.

The second interpretation is completely self-contradictory. Is she afraid that god will let his husband be killed, because she doesn't believe? That makes no sense.

Comment by Creature on May 18, 2009 at 12:31am
Why is blaming "God" easier than blaming the assholes that created the situation??? I don't know. My brother is an Iraq war veteran, and I can relate to what the families go through..but at the same time turning it into an excuse for self pity is just plain selfish, and most of the pissing and moaning you can do is futile. I think that trying to make it right is really the best thing any of us can do.

Comment by Jennifer W on May 17, 2009 at 7:00pm
What kind of weak minded statement is that? This makes it seem like Atheists have no backbone whatsoever.

If you ask me that type of statement seems like a cry for attention. I mean c''mon, what a way to think about your husband and she make it about yourself! He's the one who's life is on the line, not you! This disgusts me! If you think your husband is your collateral damage to God, you are a theist. Take your empty minded statements elsewhere.

Comment by Alpha Bitch on May 17, 2009 at 5:46pm
She isn't an atheist. A true atheist would be worried her husband might not come home because he's in the middle of a shitstorm. A real atheist wouldn't be afraid of god's punishment because she wouldn't believe in god. This person either doesn't know what she believes and may be in a transitional phase, or she is a believer trying to take a dig at atheists.