This is some seriously messed up nonsense. 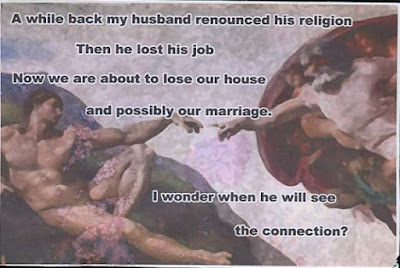 I found this on Postsecret today. It reads:


"A while back my husband renounced his religion Then he lost his job Now we are about to lose our house
and possibly our marriage
I wonder when he will see the connection?"

I can think of at least two reasons why this is bullshit.

First off: He could very well have lost his job due to (non)religious persecution. Maybe that's too big of an assumption to make, but it's possible. Many people find themselves alienated by their family and friends when they announce that they are nontheists. Judging by the wonderful Christian Love™ his wife demonstrates here, it doesn't seem unlikely that people don't treat him as kindly as they did before.

Second: The connection the secret-sender has made here is obviously a stretch. There's an economic crisis going on right now and many people are losing their jobs and their property. Financial trouble is a huge strain on a relationship, so they're probably losing marriages too. This includes all sorts of people and the faithful are no exception. Why's it always a good-ol'-fashioned Skydaddy spanking when it's not a pious conservative Christian that's had something bad happen to them? Then it's The Lord's Mysterious Ways or a test when it's a religious person? How convenient.

Really, when you think about it, why would an omnipotent being go so far as to ruin the life of one specific person who did not believe in it? Why bother? Why not go after those people who are actually hurting someone? If this is her idea of justice, I'd say that's pretty screwed up. In the words of Bill Hicks:


The whole image is that eternal suffering awaits anyone who questions God's infinite love. That's the message we're brought up with, isn't it? Believe or die! "Thank you, forgiving Lord, for all those options."


Things like this really get me going. It comes as a reminder--as though we don't have enough already--that there are people who really, truly hate us for our faith. In cases like this, it's a person that we love. This woman is his wife. She supposedly loved him enough to marry him. Now it's almost as though she's gleefully watching him suffer just because he believes in one less god than she does. Granted, there are a lot of opinions that make me lose respect for a person, but I'd like to think I wouldn't secretly sit there thinking "I told you so!" the next time something bad happened to them. Comment by Clarence Dember on May 17, 2009 at 2:31pm
A type of sock puppet narcissism where the person projects their own narcissistic personality traits onto an accessory sock puppet because they themselves are too shame based to to act on that criminal and un-empathetic basis directly? Narcissism with god delusion...

Comment by O'Tater on April 20, 2009 at 9:41am
I'm glad you posted this. I saw this on Postsecret this morning and was just appalled at this woman's lack of compassion for her husband during this hard time. It always amazes me how so many Christians preach love and kindness, but have no love to spare for those who don't share their beliefs.

Comment by Buffy on April 20, 2009 at 7:31am
So what about all of those believers who are now out of work? Did they not pray hard enough? Did God just hate them? Did they pray to the wrong god?

I so detest idiots who prey on others during times of upheaval and distress to peddle their bullsh*t religion.