"Spontaneous Evolution" Maybe one day, but still just not real. More not science.

I was writing and playing with picasa web albums some, and came across the site for Dr. Bruce Lipton's latest book, Spontaneous Evolution. I also wrote these words on this cat picture. You can do unicorn stickers and stuff too.

Something is certainy ridiculous. Read on: 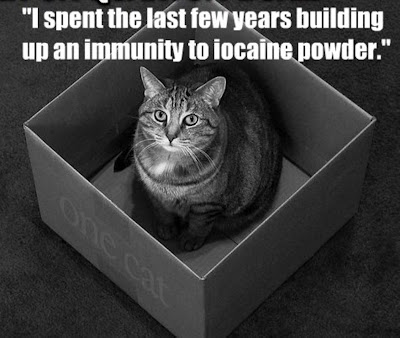 From the website of Dr. Bruce Lipton, advertising his new book.


Spontaneous Evolution: Our Positive Future and a Way to Get There from Here by Bruce H. Lipton, Ph.D., Steve Bhaerman


We’ve all heard stories of people who’ve experienced seemingly miraculous recoveries from illness, but can the same thing happen for our world? According to pioneering biologist Bruce H. Lipton, it’s not only possible, it’s already occurring.

In Spontaneous Evolution, this world-renowned expert in the emerging science of epigenetics reveals how our changing understanding of biology will help us navigate this turbulent period in our planet’s history and how each of us can participate in this global shift

By questioning the old beliefs that got us to where we are today and keep us stuck in the status quo, we can trigger the spontaneous evolution of our species that will usher in a brighter future.

It begins like a fable, with an advertisement wedged at the end. The classic self-help mantra, I suppose. From “I’m ok, you’re ok” to “breaking the bonds of biology,” there have been slogans, some more propagandist, some less, as long as there has been straight to consumer marketing of unreviewed—heavy on the quotation marks—“science.”

(I will not mention snake-oil, or use the word carpet-bagger. That would be a shameful ad hominem)


We now have enough information to know that we are under threat of cataclysm, and we’ve been invited to a revelation.

By questioning the old beliefs that got us to where we are today and keep us stuck in the status quo, we can trigger the spontaneous evolution of our species that will usher in a brighter future.


Well. This is just a lie. But it’s also not a questioning of the status quo. It’s really not that emotional, it isn’t supposed to be. I love it for the moments of “finally the nerds win.” When they send a signal that navigates a satellite with a nudge of acceleration-from a distance of 8.8 AU (around 800,000,000 miles), it’s fine if they crack open some bubbly and all kiss. The “family portrait” of our inner solar system that gave Sagan his pale blue dot , which we attained in the act of utilising the gravity of Saturn to change the trajectory of the craft to it’s course through the distant gas giant twins and the has-been and sometime superlative outlander, to finally overtake Pioneer 1 in 1998 (at around 66. AU’s distance.) is cause for celebration.

It’s a lie because the causation is never included, he never follows through, Dr. Lipton fails to discuss it. The expanded description is epically large for its actual content.

Infused with intelligence and wit, Spontaneous Evolution is an insightful, playful, and ultimately hopeful look at the unfolding destiny of our species-and how you can play an active role in birthing the evolution of humanity.


Dr. Bruce Lipton is an internationally recognized leader in bridging science and spirit. He has been a guest speaker on hundreds of TV and radio shows, as well as keynote presenter for national and international conferences.


Dr. Lipton began his scientific career as a cell biologist. He received his Ph.D. Degree from the University of Virginia at Charlottesville before joining the Department of Anatomy at the University of Wisconsin’s School of Medicine in 1973. Dr. Lipton’s research on muscular dystrophy, studies employing cloned human stem cells, focused upon the molecular mechanisms controlling cell behavior. An experimental tissue transplantation technique developed by Dr. Lipton and colleague Dr. Ed Schultz and published in the journal Science was subsequently employed as a novel form of human genetic engineering.


In 1982, Dr. Lipton began examining the principles of quantum physics and how they might be integrated into his understanding of the cell’s information processing systems. He produced breakthrough studies on the cell membrane, which revealed that this outer layer of the cell was an organic homologue of a computer chip, the cell’s equivalent of a brain. His research at Stanford University’s School of Medicine, between 1987 and 1992, revealed that the environment, operating though the membrane, controlled the behavior and physiology of the cell, turning genes on and off. His discoveries, which ran counter to the established scientific view that life is controlled by the genes, presaged one of today’s most important fields of study, the science of epigenetics. Two major scientific publications derived from these studies defined the molecular pathways connecting the mind and body. Many subsequent papers by other researchers have since validated his concepts and ideas.


Dr. Lipton’s novel scientific approach transformed his personal life as well. His deepened understanding of cell biology highlighted the mechanisms by which the mind controls bodily functions, and implied the existence of an immortal spirit. He applied this science to his personal biology, and discovered that his physical well-being improved, and the quality and character of his daily life was greatly enhanced.


Dr. Lipton has taken his award-winning medical school lectures to the public and is currently a sought after keynote speaker and workshop presenter. He lectures to conventional and complementary medical professionals and lay audiences about leading-edge science and how it dovetails with mind-body medicine and spiritual principles. He has been heartened by anecdotal reports from hundreds of former audience members who have improved their spiritual, physical and mental well being by applying the principles he discusses in his lectures. He is regarded as one of the leading voices of the new biology. Dr Lipton’s work summarizing his findings, entitled The Biology of Belief.

It is a list of qualifications, and it is not shabby in that regard (which makes it all the more tragic--the man must know what what he is doing). He’s not an MD, but he has an impressive resume of involvement with innovation and legitimate academic employment with no record of “heresy” therein (notice it’s only a religious bent that has one condemning SPEECH as evil). However, he is practicing medicine, without a license. He is telling people that they can be cured by their will of pernicious pathologies. He discredits himslef by claiming the title of ferryman, with the manipulative conceit of "bridging science and spirit." There is no such field.
There is philosophical language for science, to be sure, but this is a theology. It's a good thing biology has far fewer dramatically metaphoric purveyors than physics.


I first encountered him when good friend Tauriq Moosa, writer for 3 Quarks Daily and other widely read rational humanist blogs, shared aan article with me concerning the publication in a Swedish journal of the work of two slightly less eschatological researchers in the field of epigenetics. In the insuing research on the pop perception of this budding science, I encountered Lipton. I was appalled, and addressed the scientific impotence of his claims:

Dr. Lipton describes in the opening of Where Mind and Matter Meet three primary mistakes that his “New Edge” approach to biology and health can correct towards a healthier, smilier future: the retention of a Newtonian concept of physics, adherence to a gene determined expression of phenotype, and the Darwinian paradigm as a whole in favor of Lamarck.

First, let us contend with those three “mistakes,” starting with the Newtonian anachronism. The cry of quantum revolution, liberation a la Heisenberg and Copenhagen, was an inane and abrasive bugling to my ears long before I heard it invoked here by Lipton.

The reality is, Dr. Lipton never involves quantum physics by invoking more than its name as authority, as with his allusive discussion of epigenetics. He mentions the very complex and long known functions of formative genetics such as methylation and chromatin formation. We are learning much more, and seeing with more clarity the immense influence, of extra- or epigenetic influences in many processes, but we have not found an "immortal soul," we shall not with well wishes untie the Gordian coil.

At conception the human is little more than DNA. A zygote acquires all of its formative physical material from without, first through the placenta and after birth through the consumption of resources, mostly in food or drink, but we are increasingly seeing the effect on our systems which our dispositions influence. Oxytocin, serotonin, adrenal hormones, and all manner of endocrine hormones in interplay with our emotional affect are being described with more and more detail, to the level of a dendrite. A continual augmentation of our knowledge in this regard will certainly expand our ability to treat and prevent human disease, and all ethical investigation of both epigenetic and genetic influence ought to be encouraged

I’m not arguing against the fervent investigation of any new or newly realized modality of treatment.
But Dr. Lipton, qualified scientist that I believe he is, is not an ethical practicioner unethical. He is not a rebel against the “status quo,” he is an opportunist. At $25 dollars a book, it pays to promise much, and deliver little. Why would the greater body of science not wish to prophet, I mean profit, by this.
You may buy the book if you wish, but there are good reasons we don’t allow people to practice medicine without a license.


If you are a researcher, practicioner, journalist, or avid non-professional interested in improving science and denouncing charlatans, the brilliant Emma (Neurilemma) and brilliant Barrett Brown may have some thing for you. For more information on the Science Journalism Improvement Project, email Emma or Barret with a short list of interests. Be glad ya did.