The US Patent Office is insane. The only requirement for a patent for an obvious thing like throwing a stick for a dog is that nobody else has already patented it. So you can start suing people for doing an action you "own".

The patent was filed in March and published by the US Patent and Trademark Office last week. The retail vessel carries a beautifully simple name—“bag”—and Apple describes it thusly:

A paper bag is disclosed. The paper bag may include a bag container formed of white solid bleached sulfate paper with at least 60% post-consumer content.

Will the USPTO grant the patent? That's anybody's guess. They've certainly granted some questionable ones, both for tangible inventions and for software.

Stupid Design Patent of the Month: Rectangles on a Screen

Design patents, unlike the utility patents we usually feature, consist only of a single claim followed by pictures. It is generally the pictures that inform the public as to what is claimed. Importantly, in a design patent only the features drawn in solid lines are claimed. Anything in dotted lines is generally not part of the claim.

The only thing claimed in this design patent are the three rectangles at the top and the square beneath them. This patent is both remarkably trivial and remarkably easy to be accused of infringing.

Below is the sole picture from the patent showing the patented design:    [emphasis mine] 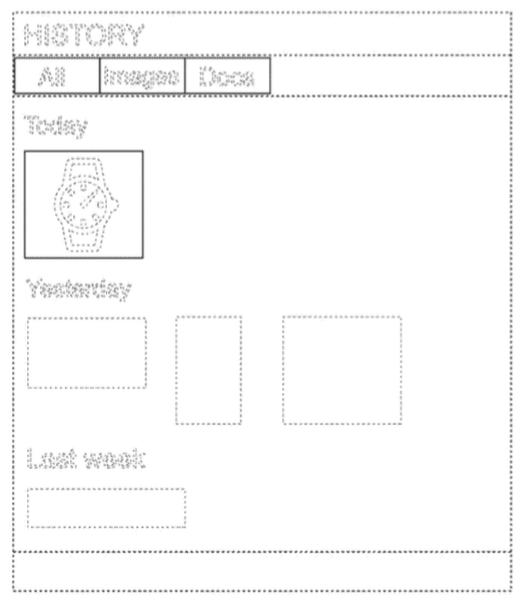 … under current law, if someone is found to infringe a design patent, the patent owner can argue that it is entitled to all of the profits from that website.

… the Patent Office still issues patents on trivial designs at an alarming rate.

According to this patent, Apple can sue you if any of your screens has three rectangles in a row with a square somewhere below.

My guess is that a random sample of a thousand websites will get a hit on this design infringement in 90% of cases. So Apple could sue everybody, theoretically, and own the world.